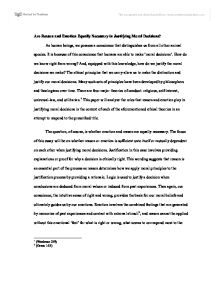 Are Reason and Emotion Equally Necessary in Justifying Moral Decisions?

Are Reason and Emotion Equally Necessary in Justifying Moral Decisions? As human beings, we possess a conscience that distinguishes us from all other animal species. It is because of this conscience that humans are able to make 'moral decisions'. How do we know right from wrong? And, equipped with this knowledge, how do we justify the moral decisions we make? The ethical principles that we carry allow us to make the distinction and justify our moral decisions. Many such sets of principles have been developed by philosophers and theologians over time. There are four major theories of conduct: religious, self-interest, universal-law, and utilitarian.1 This paper will analyze the roles that reason and emotion play in justifying moral decisions in the context of each of the aforementioned ethical theories in an attempt to respond to the prescribed title. The question, of course, is whether emotion and reason are equally necessary. The focus of this essay will be on whether reason or emotion is sufficient unto itself or mutually dependent on each other when justifying moral decisions. Justification in this case involves providing explanations or proof for why a decision is ethically right. This wording suggests that reason is an essential part of the process as reason determines how we apply moral principles to the justification process by providing a rationale. ...read more.

Nevertheless, both reason and emotion are necessary to justify moral decisions in this case. Thirdly, the self-interest theory claims that the ethical goal of each individual is to promote personal interests and achieve maximum contentment. Aristotle believed that conscience is inherent in human rationality; what is considered to be ethically right is striving to further one's own interests and success in a virtuous manner. However, the self-interest theory is only plausible when assuming that everyone is capable of preserving their self-interests and that all people strive for common fulfillment.7 It claims that one can only value others if one values oneself. Justification, in this case, is based on self-interest as directed by conscience. Humans may have an intrinsic rationality; but their desires to seek fulfillment depends on the way they value, or feel about, themselves. Additionally, due to the limits of language as a social construct, what is interpreted as "virtuous" will differ among individuals. The varying perspectives ultimately depend on personal conscience, as based on emotionally-tied values. Any attempt to justify a moral decision using reason will be based on emotional feelings related to the personal desire for happiness and fulfillment, and on a personal (contextualized) understanding of virtue. ...read more.

Perhaps I view myself as a moral being and it was in my self-interest to seek a feeling of contentment in my morality - a satisfaction of having done something 'right' - and an appearance of being responsible. In this case, my decision cannot only be justified by an intrinsic rationality but also my pride. Finally, my decision may be utilitarian in the sense that not only did I gain peace of mind but I was looking out for my brother's health and well-being while also raising my parents' awareness. We justify moral decisions with both reason and emotion. Emotion is integral to our beliefs because our beliefs are learned, internalized and reinforced with emotionally-charged memories. Our capability to reason allows us to deduce from our emotion-based values or beliefs, as well as to induce from our emotion-coded memories in order to justify something as right or wrong. Thus, a clearly delineated line, which is to say a meaningful distinction between the two ways of knowing, is impossible to achieve. Perhaps the fact that our values are very much contextualized makes emotion the weaker component in the justification process. Nevertheless, emotion remains very much present as it provides the foundation of our values which determine the way we rationalize and justify our moral decisions. Although everyone has and uses reason and emotion to different degrees, it seems that they are both necessary in justifying moral decisions. ...read more.