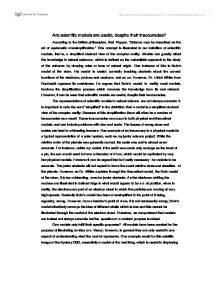 Are scientific models useful, despite their inaccuracies?

Are scientific models are useful, despite their inaccuracies? According to the British philosopher, Karl Popper, "Science may be described as the art of systematic oversimplification." This concept is illustrated in our definition of scientific models, that is, a simplified abstract view of the complex reality. Models can greatly affect the knowledge in natural sciences, which is defined as the naturalistic approach to the study of the universe by obeying rules or laws of natural origin. One instance of this is Bohr's model of the atom. His model is useful: correctly teaching students about the correct locations of the electrons, protons and neutrons and so on. However, Dr. Ulrich M�ller from Dordrecht opposes its usefulness. He argues that Bohr's model, in reality most models, involves the simplification process which removes the knowledge from its real referent. However, it can be seen that scientific models are useful, despite their inaccuracies. The representations of scientific models in natural science are not always accurate. It is important to note the word "simplified" in the definition: that a model is a simplified abstract view of the complex reality. Because of this simplification there will often be a number of inaccuracies as a result. These inaccuracies can occur in both physical and theoretical models, and can include problems with size and scale. The issues of wrong sizes and scales can lead to misleading learners. ...read more.

In the case of Bohr's model of the atom, as explained before, it effectively conveys the idea of different shells and the maximum electrons found in each shell. These functions cannot be explained through the model of the electron cloud whose purpose would probably be to illustrate the reality of an electron and the existence of electron sub-shells like the s,p,d and f sub-orbitals. However it also demonstrates the quantum theory and all implications of the quantum theory. But perhaps that, in extension, was also a purpose of the model. Therefore, we can conclude that models do achieve their appointed purposes. Now, let us evaluate if scientific models are useful and effective, despite their inaccuracies. According to us, useful could be taken to mean a beneficial use while effective is producing the desired result. Basically, so far our reasoning is 'inaccuracies in a model may affect the model's purpose.' Since, during the first term, I had decided to change my subject to biology, I had to catch up on missed topics. One of those topics was 'The chemistry of life.' I had come across a diagram of a DNA molecule replicating and due to the oversimplification, it had misleaded me into thinking replication occurs when the DNA is uncoiled. Taken the example of the periodic table, inaccuracies may include the absence of certain elements due to being undiscovered. ...read more.

Any other model inclusive of the inaccuracies of scale, and all these determining factors would turn out to be far from precise. Even if this conclusion doesn't affect society or its perception, then models would continue to be perceived as more accurate than they are misleading a large number in the population. Thank you for listening! Notes topic sentence (kc) explain ts argument (advantage) example counter argument (disadvatge) example different perspectives (teacher, student) implication AND underlying assumptions concludin sentence (conclusion bout ki) Bohr's model is being critiqued by many scientists Ulrich M�ller Dordrecht For the scientist, a model is also a way in which the human thought processes can be amplified WHY DO WE USE MODELS Models are typically used when it is either impossible or impractical to create experimental conditions in which scientists can directly measure outcomes. For example KNOWLEDGE CLAIMS * Scientific models are useful, despite their inaccuracies. > Scientific models are not always accurate o Scale o Simplification (abstract) o Misleading o Don't perform things which real models do > Scientific models convey ideas and theories effectively o What is effectively? o Why do we need models o Examples of models and how much they convey > Models are more practical than the idea which they are represent o Adapted or designed for actual use o Eg - atom > Models can only fulfill their specific purposes o Pg 49 - solar system needed to locate positions on the map but not needed to calculate distances between places http://plato.stanford.edu/entries/models-science/#OntWhaMod http://www.google.com.au/search?hl=en&client=safari&rls=en&q=%22inaccuracies%22+of+%22Bohr%27s%22&aq=f&aqi=&aql=&oq=&gs_rfai= http://en.wikipedia.org/wiki/Scientific_modelling http://uk.answers.yahoo. ...read more.