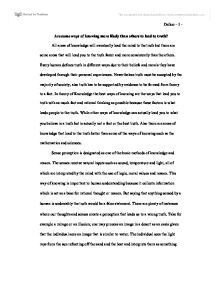 Are some ways of knowing more likely than others to lead to truth?

Are some ways of knowing more likely than others to lead to truth? All areas of knowledge will eventually lead the mind to the truth but there are some areas that will lead you to the truth faster and more consistently than the others. Every human defines truth in different ways due to their beliefs and morals they have developed through their personal experiences. Nevertheless truth must be accepted by the majority of society; also truth has to be supported by evidence to be formed from theory to a fact. In theory of Knowledge the best ways of knowing are the ways that lead you to truth with as much fact and rational thinking as possible because these factors is what leads people to the truth. While other ways of knowledge can actually lead you to what you believe is a truth but is actually not a fact or the best truth. Also there are areas of knowledge that lead to the truth better than some of the ways of knowing such as the mathematics and sciences. ...read more.

This is seen similarly in the cartoon of the cave and the shadows. In the cave their perception of reality was that everything was in two dimensions but in societies reality the world is actually in three dimensions and it is filled with colors. So as long as your perceived knowledge is not challenged or questioned than you will always know the truth. It just may not be accepted by the rest of society. Reason is the ability to help people decide what is true and what is not. Most of the time, reason is more commonly related to math and science subjects, where logic is put into place in order to obtain logical validity and justify claims. Through observations and experiments, we can prove, within reason, whether a hypothesis is true or not, and in the end, broaden and individual's knowledge. On the other hand, reason can cloud knowledge to a certain extent, in the case of different culture beliefs as well as more creative subjects such as music and art. ...read more.

Mainly due to the fact that his emotional level in the game was much lower than mine so he was able to use his correct reasoning skills to perceive the correct call. In this example my reasoning skills were over shadowed by my emotions which in turn lead me to an incorrect truth. So in other words emotion by itself is a horrible way of knowledge to discover the truth in your perceptions. In conclusion I would have to say that the only way of knowing that by itself will lead to the truth is reason. Besides that all other ways of knowing cannot lead you to truth but if there is a combination of all the ways of knowing in the search for truth then and only then can truth actually be found by an individual. Just like if you were getting a job recommendation, you wouldn't ask for a recommendation from just one person you consider all possibilities so the boss gets a full picture of you as an employee. So the only way to find truth in life that is accepted by all of society is to consider all possible ways of knowing. Delker - 1 - ...read more.