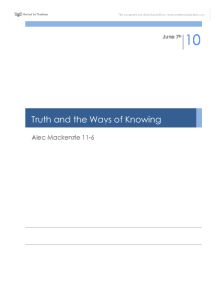 Are some ways of knowing more likely to lead to truth than others?

Instead of being spoken like a language, mathematics is expressed. Through the proper understanding of the language, any person can utilize the patterns, numbers etc. and therefore apply the proper reasoning (whether than be inductive or deductive reasoning). Emotion as well as perception do not play a large role in finding the truth within mathematics because they involved the human senses which in terms of the truth, do not apply. This is because the truth in mathematics is dependent on numbers and calculations, not through feelings or senses. Are some ways of knowing more likely than others to lead to truth? Yes, some are. With different areas of knowledge come different truths that are distinct and vary from other areas. With distinct truths come easier ways of leading to truth that others. It is easier to use reason as a way of knowing than it is for perception, emotion or language to lead to the truth in science. The truth in the arts is easily lead to through the use of perception, language as well as emotion compared to the use of reason (complete opposite of the truth in science). The truth in mathematics can be accurately found through a mixture of science and the arts - which in this case is reason and language while emotion and perception are not reliable due to the human senses. Overall, depending on the area of knowing and the form of truth ultimately reflects different accurate ways of knowing that lead to truth. 1 Definition of truth according to 'The Collins English Dictionary' ...read more.