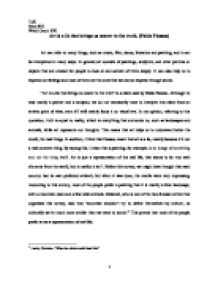 Art is a lie that brings us nearer to the truth. (Pablo Picasso) Discuss.

Melamid, who is one of the two Russian artists that organized this survey, said that "countries shouldn't try to define themselves by culture, as culturally we're much more similar than we want to admit."1 This proves that most of the people prefer art as a representation of real life. Language is one of the four ways of knowing and it is needed to communicate people's thoughts, feelings and many other things. It is very related to art because "it is a way for people to express what they feel in ways that you can't do with words."2 Sometimes, people cannot express certain feelings through oral or written language and therefore they may use art as a way to communicate. For example, most of the time, very small children, who don't know to talk yet, may use drawings to express their opinion, beliefs or their sense of reality. ...read more.

Yet they make the same judgements as adults."3 This proves that we are attracted by the people that satisfy our sense of reality. Apparently, the statement may seem to be really specific because it relates the truth to the arts, but in reality it is not so because as I said at the beginning, art is something very broad and this make this statement too vague and it can be interpreted in many ways because each person has a different perception of art, truth and lie. However, if we analyse this quotation to a specific art form, in this case visual arts, this sentence begins to be narrower and it's easier to draw conclusions. From my point of view, people create arts because they have to express some feelings at the moment of its creation. It is like a way of describing how a person feel and then the artist try to understand his own true feeling by examining his own work. ...read more.