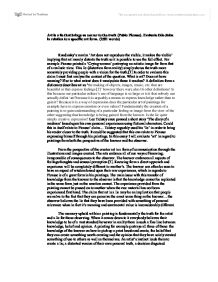 Art is a lie that brings us nearer to the truth (Pablo Picasso). Evaluate this claim in relation to a specific art form.

Art is a lie that brings us nearer to the truth (Pablo Picasso). Evaluate this claim in relation to a specific art form. (1581 words) Kandinsky's maxim 'Art does not reproduce the visible, it makes the visible' implying that art merely distorts the truth so it is possible to see the full effect. For example Picasso painted a 'Crying woman' portraying an artistic image far from that of a realistic view. This lie (distortion from reality) simply shows the truth more accurately providing people with a vision for the truth.[1] In order to evaluate this claim I must first analyse the content of the question. What is art? Does art have meaning? If so to what extent does it manipulate those it reaches? A definition from a dictionary describes art as 'the making of objects, images, music, etc. that are beautiful or that express feelings [2]' however there were also 16 other definitions! Is this because our particular culture's use of language is so large or is it that nobody can actually defint 'art'because it is arguably a means to express knowledge rather than to gain it? Because it is a way of expression does the particular art of paintings for example have to express emotion or even values? ...read more.

others thriving off of the belief the observer has in the knower that they have been provided with the truth: however the above claim by Picasso could actually be seen as a confession to his observers. It finally came to light that people will never stop questioning their world regardless of excuses and obstacles which they may face. A logical way of filtering knowledge into two categories by individuals takes place through the ways of knowing. A Sunday newspaper once printed that a man responsible for the World War II bombings had been found on the news. This was totally discarded by the public because their `reason' told them it was ridiculas and impossible. This was followed by them analysing the `language` in the headline and concluding that they were simply appealing to people's `emotions`. Arguably they also `perceived` the image to also be of fake origin[4]. Bertrand Russell once categorised knowledge into two main categories 'knowing that' and 'knowing how': in regard to the claim how it is possible to distinguish what is a lie and what is the truth? From a painting the distinguishing features between the two are totally as one as the knower who created the image has painted a blank canvas in his own truth and lies. ...read more.

From a sense perception view, seeing it is a primary way of experiencing the painting; texture could also be deemed useful. Emotion can be very difficult to analyse from a painting because different people feel different things from the same stimulus: arguably because many peoples emotions can be exploited and what seems to be the truth is actually not. Reason can be seen to create a sense of logic about the painting; what is it? How do you know what it is? Finally Language is not used in a painting; does this actually mean that Picassos' claim is irrelevant based upon the fact that we cannot come to a conclusion on knowledge without language being part of it? Because art is solely based upon imitation it is arguable extremely difficult to analyse Picasso's claim. We as individuals cannot define between what is truth and what is a lie: we can only judge the claim based on judgement and belief. It is also debatable as to what art is defined as, regardless of the effect that it has on an individual. An artist simply paints his story and emotions onto a canvas to be analysed by another. This story is provided alongside no language, reasoning or primary emotion... because of this is art knowledge? Can something be true or false, lie or the truth without being justified in the first palce? ...read more.