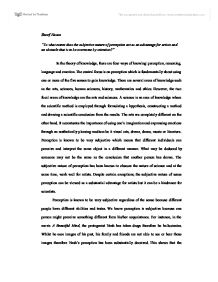 Sharif Hasan "To what extent does the subjective nature of perception act as an advantage for artists and an obstacle that is to be overcome by scientists?" In the theory of knowledge, there are four ways of knowing: perception, reasoning, language and emotion. The central focus is on perception which is fundamentally about using one or more of the five senses to gain knowledge. There are several areas of knowledge such as the arts, sciences, human sciences, history, mathematics and ethics. However, the two focal areas of knowledge are the arts and sciences. A science is an area of knowledge where the scientific method is employed through formulating a hypothesis, constructing a method and drawing a scientific conclusion from the results. The arts are completely different on the other hand. It accentuates the importance of using one's imagination and expressing emotions through an aesthetically pleasing medium be it visual arts, drama, dance, music or literature. ...read more.

This shows that the perception is skewed towards one viewpoint because people have different abilities to see and hear different things. Another reason why perception may be subjective is because different individuals have different tastes and this can formulate differing opinions about a particular topic. For example, a Middle Eastern person, who is not very accustomed to spicy food, might find jalapenos very spicy because of the amount of heat in jalapeno however an Indian may find it insufficiently spicy because they eat much spicier food at home. Across the world, different people have contrasting tastes therefore this makes the nature of perception even more subjective. However, there are counter claims which contravene with this knowledge issue. For instance, when it comes to color, almost everyone can agree on one standpoint. For example, everyone can safely say that the sky is blue including the color blind people because they only struggle perceiving the colors red and green. ...read more.

However, these subatomic particles are so infinitesimally small to the extent that no one can be able to see them, not even with the aid of a microscope. This can pose a major problem for scientists because it hampers with their knowledge of atomic chemistry. It also ignites doubts about whether claims about the atom are correct or not. There are many experiments to find out what exists within an atom but they are all different, thus substantiating the subjective nature of perception. However, this can prove to be an invalid argument because different people interpret different phenomena differently. In this case, even though all the people would struggle to see the subatomic particles, some people would more easily find evidence of atomic structures. Acids are another example which substantiates the subjectivity of perception. Orange contains an acid called citric acid which has a high pH and is therefore a weak acid. ?? ?? ?? ?? ...read more.