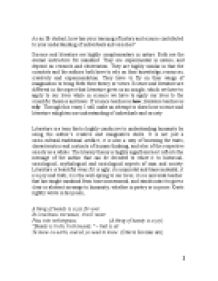 As an IB student, how has your learning of history and science contributed to your understanding of individuals and societies?

﻿As an IB student, how has your learning of history and science contributed to your understanding of individuals and societies? Science and literature are highly complementary in nature. Both are the eternal instructors for mankind. They are experimental in nature, and depend on research and observation. They are highly similar in that the scientists and the authors both have to rely on their knowledge, resources, creativity and experimentation. They have to fly on their wings of imagination to bring forth their theory or views. Science and literature are different in the aspect that literature gives us an insight, which we have to apply to our lives while in science we have to apply our lives to the scientific theories and laws. If science teaches us how, literature teaches us why. Through this essay I will make an attempt to show how science and literature enlighten our understanding of individuals and society. Literature is a term that is highly conducive to understanding humanity by using the author?s creative and imaginative skills. It is not just a socio-cultural-traditional artifact; it is also a way of knowing the traits, characteristics and instincts of human thinking, and also of the respective society as a whole. ...read more.

Hamlet by Shakespeare Literature again tells us the man does mot take a lesson from history. What Hitler did in the Third Reich during the World War II was done by Saddam Hussein in the Gulf war, and the same is being done by general Gaddafi in Libya. The society is the sum total of its individuals. As Hitler was the idol for the Germans, Saddam was for Iraqis, and Gaddafi is for Libyans. Thus literature tells us man, being obstinate and inquisitive by nature, is not ready to accept multiple viewpoints on a knowledge issue; he will inherently replace or substitute them for others. Literature is the outcome of the creative and imaginative skills of an author. It helps us learn about individual development of a character, who is no other than a man belonging to his society. Literature helps us realize the ideology of people at a particular point of time. It has the power to teach an individual, and also how it can be related to the individual?s society. For example at one point of time the Greek and Roman society called the birth of twins as ominous. In the Middle Ages slavery was considered not a stigma on mankind. ...read more.

A recent report from the U.S. census reveals that people prefer to reside at places that have names similar to their first names or surnames. In Delhi there are a number of places that start with the surnames, and it is not surprising that men with this particular surname inhabit the place abundantly. It is not that science does not fail anywhere when it comes to understanding individual behavior. It does fail, for example it cannot describe how it feels when one is in love, nor the attitude of a particular society or community to love. For some it may be a divine feeling while for others it may be a transgression. Perhaps more than science literature can be of more help to define love. Whatever be the case, one thing is indubitable that the role of science and literature is immense and can easily eclipse these minor foibles. To conclude I would like to assert that science and literature have strengthened our understanding of individual ad society. Whether man creates society or society creates man is a debatable issue, but one thing can be asserted that both science and literature serve an exemplary role in the understanding of individuals and societies. ...read more.