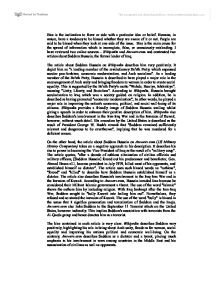 Bias is the inclination to favor or side with a particular idea or belief. Humans, in nature, have a tendency to be biased whether they are aware of it or not. People are said to be biased when they look at one side of the issue. Bias is the main cause for the spread of information which is incomplete, false, or consciously misleading. I have reviewed two online sources - Wikipedia and Answers.com and contrasted two articles about Saddam Hussein, the former leader of Iraq. The article about Saddam Hussein on Wikipedia describes him very positively. It depict him as "a leading member of the revolutionary Ba'ath Party, which espoused secular pan-Arabism, economic modernization, and Arab socialism". As a leading member of the Ba'ath Party, Hussein is described to have played a major role in the encouragement of Arab unity and bringing freedom to women in order to create social equality. ...read more.

The article quotes, "after a decade of ruthless elimination of civilian officials and military officers, [Saddam Hussein] forced out his predecessor and benefactor, Gen. Ahmad Hasan al-, became president in July 1979, killed most of his opponents, and established himself as dictator". The article uses such biased words as "ruthless", "forced" and "killed" to describe how Saddam Hussein established himself as a dictator. The article also describes Hussein's involvement in the Iraq-Iran War and in the Invasion of Kuwait. According to Answers.com, Hussein invaded Iran because he considered their Militant Islamic government a threat. The use of the word "Islamic" shows the authors bias by including religion. With Iraq bankrupt after the Iran-Iraq War, Saddam sought to "bully Kuwait into bailing him out". Nevertheless, they refused and so started the invasion of Kuwait. The use of the word "bully" is biased in the sense that it signifies persecution and terrorization of Saddam and the Iraqis. ...read more.

Hence, it is very important that readers understand the difference between subjectivity and objectivity in order to determine the credibility of the information they are receiving from the media. The two sources chosen depict two different descriptions about the same person, Saddam Hussein. Wikipedia is shown to take a positive side to Saddam's biography; whereas Answers.com leans towards a much negative description of his character. We must keep in mind, however, that truth is subjective and may be affected by one's perception of the subject matter. What can be true to one person may be totally false to another person. Similarly, the way in which one person perceives something may be perceived differently by another person. For this reason, when articles, stories, and descriptions are published about people, places, or events, they are usually subjective to the author of the article. Such reports are not trustworthy and must be free from judgement, opinion, and biases. In order for articles to be unbiased, the author must be objective in his or her writings and must therefore discuss both sides of every issue equally. ...read more.