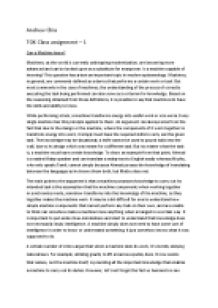 ﻿Andrew Chia TOK Class assignment ? 1 Can a Machine know? Machines, as the world is currently undergoing modernization, are becoming more advanced and can be looked upon as a substitute for manpower. Is a machine capable of knowing? This question has arisen an important topic in modern epistemology. Machines, in general, are commonly defined as a device that performs a certain work or task. But most commonly in the case of machines, the understanding of the process of correctly executing the task being performed can also serve as a criterion for knowledge. Based on the reasoning obtained from these definitions, it is possible to say that machines do have the skills and ability to know. While performing a task, a machine transforms energy into useful work or vice versa. Every single machine has this principle applied to them. An argument can always arise from the fact that due to the design or the machine, where the components of it work together to transform energy into work, it simply must have the required skills to carry out the given task. ...read more.

It may be a bit difficult for one to understand how simple machine components that cannot perform any task on their own, and are unable to think can somehow make a machine know anything when arranged in a certain way. It is important to put aside close-mindedness and start to understand that knowledge does not necessarily imply intelligence. A machine simply does not need to have some sort of intelligence in order to know or understand something; it just somehow knows what it was supposed to do. A certain number of critics argue that when a machine does its work, it?s merely obeying natural laws. For example, utilizing gravity to lift a load as a pulley does. It now seems that nature, not the machine itself, is providing all the important knowledge that enables a machine to carry out its duties. However, let?s not forget the fact us humans too are actually obeying the laws of nature. ...read more.

Kasparov accused IBM of cheating and demanded a rematch. Even humans themselves couldn?t accept the fact that a machine can surpass their ability to think. But processing and expressing emotions can be seen as an area where there are either no fixed rules or too many rules to be contained in a closed system, requiring way more powerful machines to replicate if it is even possible. Much debate has centred on whether the human mind is a formal machine, since if it were then machines would be able to express emotions like humans. A machine simply operates with the aid of its components, and these in turn help to store and use the knowledge for the machine to perform a task, which applies for most of the machines. The argument that compares a human?s brain and a machine will only lead to more controversies. There is strong evidence in favour for the case that a machine is indeed able to know. ...read more.