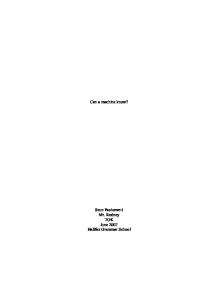 Can a machine know

Can a machine know? Seun Fashoranti Mr. Rodney TOK June 2007 Halifax Grammar School Is it possible for a machine to possess knowledge? To answer such a question two things must be known, what is the definition of a machine, can and knowledge? The scientific definition of a machine is a device that transmits or alters energy. A machine can be seen as a tool that performs commands. There are simple machines such as pulleys and levers and complex machines such as computers and robots. Can is defined as the ability to do things. Knowledge is defined as justified true belief. In this essay I will attempt to find out if a machine can truly have justified belief. I believe that humans have always been curious about how things work, which has allowed us to make such advances to in both science and technology. With movies such as The Matrix and I-Robot people have begun to wonder if a machine can have true knowledge. It has been argued that a machine does not know anything simply because it can not break away from its commands. A machine such as a computer, which can be found in business, homes and schools, only has memory and it performs its commands in which we give it. ...read more.

My Window's movie maker also kept on freezing and slowing down at the most inopportune time. A car, which is a machine because it follows the laws of physics and the motor of the car, gives out energy. A car is merely a machine that is designed to do a certain task. Newer cars, such as a Jeep Liberty can collect data from pressure and things such as weight, or even if you have your seatbelt on or not, and it will adjust to make changes such as moving your seat back automatically for you or continuously beeping until you put your seatbelt on. The Jeep Liberty also has an "Electronic Roll Mitigation (ERM) senses when a rollover may occur and applies braking." 3 I was recently interested to read an article on BBC about how scientists have some how managed to stimulate half a mousse brain on a super computer, which makes me wonder if it is possible to stimulate thought, something that many people believe is a key to knowing. Computers these days store human knowledge, they do not criticize it, and they are just processors with memory. They can not think that is to say they can not reason or reflect on anything, so it is possible that they can never truly know. ...read more.

Another question could be asked to determine whether a machine can know, if a scientist or a research were to create a functioning artificial brain, with all the neurons and synapses, would it still be considered a brain. Well yes since it can do all the same things a human brain can do which means it will be able to copy and learn from humans the same way a human baby does. Babies are a blank slate, tabula rasa, which means except for some innate abilities that they have they know nothing. And as soon as they are born they immediately start to gain knowledge through empirical and rational thinking. It seems then that, a machine which we have today can not actually know anything, however it has been seen that with twenty first century technology then a machine has begun have certain characteristics of knowing, but since it can not think it clearly has no way of knowing. Machine's are just pre-programmed units (as of right now) that react in a particular way, due to circumstance or a command. However that is not to say that a machine can never know, with constant breakthroughs in technology it is quite possible that a machine such as a robot or a computer will be able to think, and therefore it will be able to know. ...read more.