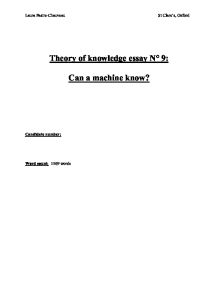 Theory of knowledge essay N� 9: Can a machine know? Candidate number: Word count: 1569 words Machines have become part of our everyday life, humans cannot live without them. In order to answer the: "Can a machine know?", it is important to define certain aspects of the question. What is a machine? What is knowledge? Is the relation between these two things very evident? I will divide the essay into three main parts. The first one will talk about the definition of a machine, the meaning of knowledge, and I will make clear that there is a difference between "to know" and "to think". The second one, which will agree with the statement, will explain the concept of artificial intelligence stating the differences between conventional artificial intelligence and computational artificial intelligence. I will also explain the different ways of knowing that a machine and a human share. Finally, I will talk about the machines being programmed by humans; I will choose some examples of machines, which I will submit to Plato's definition of knowledge. I will show that a machine cannot know like a human, stating the ways of knowing that it does not share with a human being. ...read more.

A machine knows what a human put into its electronic system. But only specific machines can do that. Indeed, coffee machine could not translate a word! Computers, calculators, translators are capable of solving problems or, in the case of the latter, translating a text. Computers are the machines that are most likely to be considered as "knower machines". When we agree that a machine can know, we have to talk about artificial intelligence which is an important contemporary science. It is a multidisciplinary field encompassing computer science, neuroscience, philosophy, psychology, robotics and linguistics, and devoted to the reproduction of the methods or results of human reasoning and brain activity. There is the conventional artificial intelligence which is a branch of artificial intelligence mainly dealing with symbolic problems and the computational artificial intelligence which its research aims to use learning, adaptive, or evolutionary computation to create programs that are, in some sense, intelligent. Computational intelligence research either explicitly rejects statistics or tacitly ignores them. So those machines are imitating the human brain. Some of them know more that certain persons, but only because humans gave them information. Humans have access to knowledge through language. ...read more.

(It was a written conversation between a human and a computer). It had a little success but not as much as Turing's prediction. Humans have different ways of knowing which a machine cannot share with them. Let's take the example of a car accident. You crash the car into a tree: the car will be broken but will not cry or feel any pain: indeed, a machine does not have feelings or emotions which are very important for a human to know. Also a machine has neither perception nor intuition. These elements are what constitute the soul. So we can say that a machine does not have a soul. Personally, I do not think that a machine can know because of its lack of soul, mind, perception, emotions, intuition and feelings. It is just a human tool and it obeys to its master. There could be some exceptions like the computers that can sometimes "imitate" human behaviour. By that, I mean that they can do things that humans are used to doing such as translations, calculations... Otherwise they are just tools. However, it maybe possible that, in the future, humans will be the tools of machines... ...read more.