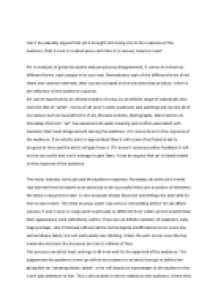 Can it be plausibly argued that art is brought into being only in the response of the audience, that a work is created anew each time it is viewed, heard or read?

﻿Can it be plausibly argued that art is brought into being only in the response of the audience, that a work is created anew each time it is viewed, heard or read? Art is a subject of great discussion and perspicuous disagreement. It comes in numerous different forms, each unique in its own way. Nevertheless each of the different forms of art share one common element; their success is based on the outcome they produce, which is the influence of the audience?s opinion. Art can be expressed in an infinite number of ways, by an infinite range of individuals who earn the title of ?artist?. Forms of art aren?t solely sculptures and paintings but involve all of our senses such as musical forms of art, literature pieces, photography, dance and so on. Nowadays the term ?art? has assumed a broader meaning and is often associated with elements that meet disagreement among the audience. ...read more.

This is all a system in direct relation to the audience, where they make the artist or they proclaim him ?not talented enough for success?. It is arguable to what extent the audience actually does create the art. It is possible that the artist makes himself and isn?t in fact made by his audience. Even though an artist may not receive positive feedback from a supposed audience, he could still consider his music, art. It is plausible that he doesn?t necessarily need the presence of an audience; instead he could be his own audience, and decide through his musical skills he could create masterpieces in art. Consider his success infallible but keep on hoping in its external success. Success besides, he will still be able to consider his personal talent ?art?. One might say that the audience`s response is not as important as the art piece itself, nevertheless the audience is the means who have the power to determine the success or failure of the form of art. ...read more.

This leads to an extremely famous philosophical question: If a tree falls in a forest and no one is there to hear it, does it still make noise? A similar approach can be applied to this case of art; if the poems had remained on his bookshelf they might as well be considered art but there wouldn?t have been anyone able to acknowledge it. Like in the forest the tree most definitively fell but nobody was there to hear it so the noise it made is absolutely uncertain. The audience is indeed the creator of art. It is absolutely brought into being by the audience. If they didn?t have the same influence the art would remain solely in the artist?s possession but wouldn?t go far ahead. It may as well be considered art but won?t really be brought to serve its actual potential. In both the examples made above the audience has a determined importance. Their response is what manages to bring the art alive and, according to its magnitude, acknowledge it in front of the whole wide world. ...read more.