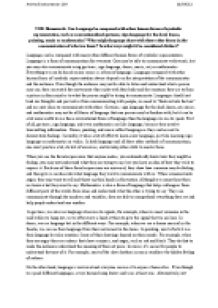 Can Language be compared with other human forms of symbolic representation, such as conventionalized gestures, sign language for the deaf, dance, painting, music or mathematics? What might language share with these other forms in the communication of what we know?

﻿Anitha Sivakumaran 12H 16/09/12 TOK Homework: Can Language be compared with other human forms of symbolic representation, such as conventionalized gestures, sign language for the deaf, dance, painting, music or mathematics? What might language share with these other forms in the communication of what we know? In what ways might it be considered distinct? Language can be compared with many other different human forms of symbolic representation. Language is a form of communication for everyone. One may be able to communicate with words, but you may also communicate using gestures, sign language, dance, music, art, or mathematics. Everything we can do based on our senses is a form of language. Language compared with other human forms of symbolic representation always depends on the interpretation of the communicator and the audience. ...read more.

Secondly, it takes a lot of effort to learn a new language, just like learning sign language or mathematics or violin. In both language and all these other methods of communication, one must practice a lot, do lots of exercises, and develop other skills to master them. When you see the facial expressions that anyone makes, you automatically know how they might be feeling, you may not understand what they are trying to say, but you have an idea of how they wish to express it. Each one of these facial expressions are universal, they show how someone may be feeling and then give us an idea into what language they wish to communicate with us. When someone looks angry, they may want to yell and throw up their hands in frustration. ...read more.

For example, when they are angry they use colours that show scariness, and anger, such as red and black. They do that to make the audience understand the meaning of their art piece. In music, it?s easier for people to understand the tone of it. For example, most of the slow rhythms in music reinforce the hidden feeling of sadness. On the other hand, language is universal and everyone can use it to express themselves. Even though we speak different languages, every human being knows and uses at least one. Alternatively, not everyone can communicate through sign language, paint, or dance. Secondly, reading, writing, speaking, and listening skills are much more valuable than musical, artistic, or even mathematical skills. They are necessary for connecting with other people. Thirdly, language is precise. When someone says a word, others who know this word know exactly what that person is talking about. In contrast, using music as an example, two people might react differently to a song they?re listening to. ...read more.