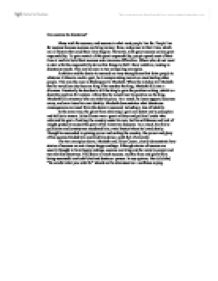 Can success be disastrous? Macbeth and Julius Caesar clearly demonstrate how stories of success are not always happy endings.

Can success be disastrous? Many wish for success, and success is what most people live for. People live for success because success can bring money, fame, and power to their lives, which are all factors that could their lives happier. However, with great success comes great responsibility. To gain control of this great responsibility, people spend most of their time at work to build their success and overcome difficulties. Others who do not want to deal with this responsibility do terrible things to fulfill their ambition, leading to disastrous results. ...read more.

Eventually he decides to kill the king to gain the position as king, which is a desirable position for anyone. Afraid that he would lose his position as the king, Macbeth kills everyone who can take his place. As a result, he loses support, becomes crazy, and even loses his own identity. Macbeth demonstrates what disastrous consequences can result from the desire to succeed, including a loss of identity. In the same way, the glory from achieving a goal can distort one's perception and ability to reason. ...read more.

Though he succeeded in gaining power and uniting the country, the power and glory of his success blinded him and lead him down a path full of calamity. The two examples above, Macbeth and Julius Caesar, clearly demonstrate how stories of success are not always happy endings. Although stories of success are usually thought to have happy endings, success can bring out the worst in people and turn terribly disastrous. The desire to reach success, and the fame and glory from being successful can both blind and destroy a person. In my opinion, the old clich�, "Be careful what you wish for" should not be dismissed as a worthless saying. ...read more.