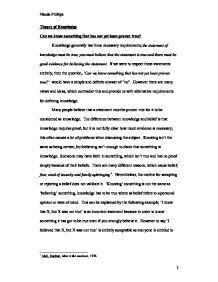 Can we know something that has not yet been proven true?

Theory of Knowledge Can we know something that has not yet been proven true? Knowledge generally has three necessary requirements; the statement of knowledge must be true, you must believe that the statement is true and there must be good evidence for believing the statement. If we were to respect these statements entirely, then the question, 'Can we know something that has not yet been proven true?' would have a simple and definite answer of "no". However there are many views and ideas, which contradict this and provide us with alternative requirements for defining knowledge. Many people believe that a statement must be proven true for it to be considered as knowledge. The difference between knowledge and belief is that knowledge requires proof, but it is not fully clear how much evidence is necessary; this often causes a lot of problems when discussing the subject. Knowing isn't the same as being certain, but believing isn't enough to claim that something is knowledge. Someone may have faith in something, which isn't true and has no proof simply because of their beliefs. There are many different reasons, which cause belief; fear, need of security and family upbringing1. Nevertheless, the motive for accepting or rejecting a belief does not validate it. ...read more.

This means that knowledge has to have evidence and cannot be based simply on opinions and ideas. Nevertheless it is not realistic to demand proof for everything. Disproving something is usually simple whereas proving beyond all doubt is virtually unachievable. However inductive logic is the process by which we move from the specific to the general and make regularities about things. This can only be known through observation and does not go beyond what is empirically verifiable. Induction is given to a process, which has been observed a number of times. This kind of logic is not logical, as the conclusion is not contained within the premises, unlike a deductive argument or syllogism. It could be disputed that induction doesn't give us certainty but does provide us with probability. This process does not prove that something is true; instead it can be used to prove that a statement is incorrect.7 Popper agreed with this and believed that induction is logically invalid but is a form of falsification, which means that it can only be used to prove that something is false. Karl Popper was a respected philosopher of the twentieth century and possibly his greatest contributions to the theory of knowledge was his investigation of the logic of scientific discovery. ...read more.

Things which we can obtain from our senses, for example we can see that the grass is green, are easily accepted as true and no-one has any reason to doubt this. However for thoughts and feelings, and things, which we have, no evidence for, it is much more complicated to validate them as knowledge. Instead we have to use the Coherence theory of truth, and judge recent or unconfirmed knowledge on the knowledge we already have, and establish whether are not they agree. In my opinion, much of the knowledge which we take as the truth has not been proven indisputably true, for example until recently Pluto was regarded by everyone as a planet and this was general knowledge, however it has now been suggested that it is not a planet and only a dormant comet. This has shown us that things can only be completely accepted as truth if we can see them, hear them, smell them or feel them. However if we only acknowledged things that we could obtain from our senses as knowledge then we would barely 'know' anything. If a statement has an adequate amount of reason to be affirmed as knowledge and it coheres with what we already claim to know then I think that it should be classed as knowledge independent of whether or not it has been proven true, in the sense of being absolutely certain. ...read more.