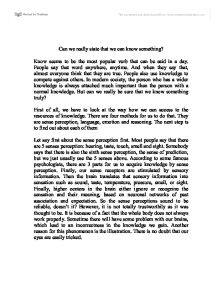 Can we really state that we can know something? First of all, we have to look at the way how we can access to the resources of knowledge. There are four methods for us to do that. They are sense perception, language, emotion and reasoning.

Can we really state that we can know something? Know seems to be the most popular verb that can be said in a day. People say that word anywhere, anytime. And when they say that, almost everyone think that they are true. People also use knowledge to compete against others. In modern society, the person who has a wider knowledge is always attached much important than the person with a normal knowledge. But can we really be sure that we know something truly? First of all, we have to look at the way how we can access to the resources of knowledge. There are four methods for us to do that. They are sense perception, language, emotion and reasoning. The next step is to find out about each of them Let say first about the sense perception first. Most people say that there are 5 senses perception: hearing, taste, touch, smell and sight. ...read more.

It is the oldest and the most popular way to communicate between human and human. It is usually used in daily communicating as well as written language which appears in books or magazines. Sometime it is also including body language as an efficient way to communicate with others. Because of its popular, it now becomes the main way of exchange knowledge. About 50% of knowledge that you can gain in a single day is gained by language. But it is still not an accurate way to acquire knowledge. It is easy to understand this because the information that we take from others is depended on them. It might be wrong, by mistake or on purpose. We can never know if it is true or not. The next way of acquiring knowledge is emotion. Our emotions are considered as the core of our direct experience of the world. Emotion can take information from external causes as well as internal cause. ...read more.

If it is wrong, we will waste our time and power to gain a helpless thing. Those are 4 methods of gaining knowledge. In fact, 4 ways to knowing thing is quite a lot for us to acquire information. But the question is that can we know something exactly? And the answer, in my opinion, is no. We can know anything perfectly, because in every condition, by every method that we can use, there is still a chance that we are acquiring wrong knowledge. Everything that we knew is not totally correct. Everything can change in a moment. A truth, which have survived for hundreds years, can be destroyed immediately just by another truth that seems to be more accurate than the older one. For example, our ancient people believed that the Earth is placed in the centre of the universe and the Sun travelled around the Earth. Nowadays, we all know the opposite thing. But who can be sure that it is totally true? Who can be sure that it will not change again? So don't say that you know something for certain, because you are lying yourself. ?? ?? ?? ?? ...read more.