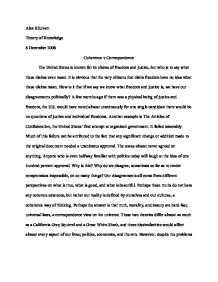 Alex Kluivert Theory of Knowledge 8 December 2008 Coherence v Correspondence The United States is known for its claims of freedom and justice, but who is to say what these claims even mean. It is obvious that the very citizens that claim freedom have no idea what these claims mean. How is it that if we say we know what freedom and justice is, we have our disagreements politically? A few months ago if there was a physical being of justice and freedom, the U.S. would have voted almost unanimously for one single candidate there would be no questions of justice and individual freedoms. Another example is The Articles of Confederation, the United States' first attempt at organized government. It failed miserably. Much of this failure can be attributed to the fact that any significant change or addition made to the original document needed a unanimous approval. The states almost never agreed on anything. Anyone who is even halfway familiar with politics today will laugh at the idea of one hundred percent approval. Why is this? Why do we disagree, sometimes so far as to render compromises impossible, on so many things? Our disagreements all come from different perspectives on what is true, what is good, and what is beautiful. ...read more.

And when these authorities clash who's to say which is correct. What the post modernist would argue is, he who has the most power has the most authority. In other words, if you don't believe what I believe I'll send in my army until you do. This seems very childish. When I was younger my and my mom would give my sister and I two pieces of cake, my sister would always take the larger one. When I would claim that's not fair she would say "I'm bigger so try to stop me". Expertise, although possibly more reliable than authority, comes from repeated experience, already discussed as individual and subjective. Also, none of these truth tests can be considered universal if Hume is right and we cannot directly perceive reality. Therefore another truth theory must be offered up: coherence. Coherence, like correspondence, has two branches: subjectivism and relativism. Subjectivism says that truth comes completely from within one's individual virtuous circle. Relativism states that truth comes from within the virtuous circles of one's culture. The three tests in coherence all rely on proper examination of one's virtuous circle, specifically the consistency of a claim with claims already considered true, covalence while looking for contradictions between claims, and logical entailment. ...read more.

The Correspondentist would argue that beauty is in the object itself. But if this were true would it not be true that all people would find the Mona Lisa beautiful. If Kant is to be believed people should come to the same conclusion of objects that are beautiful if there is beauty within that of the object itself. But there are many examples of exceptions to these rules. Tests have concluded that people find a healthy looking person more attractive simply for reproductive purposes, like that of any animal species on the planet. But there are people that believe the only attractive people are people missing limbs. If these people truly are the only attractive people why it that models and actors is aren't all amputees. Of course, coherence is not completely without fault. The subdivisions do not always work, and individuals do not always follow the morals of their societies. From this, we get the court system. Some further questions might arise from this, and there are kinks in this hierarchical system, especially when it comes to the less than perfect formation of government. Still, theoretically, coherence is more probable a response, under the arguments of Kant and Hume, than correspondence with its all-important "universal" truth can be. Whether such a theory can be practically applied is something that most people including me are still working on. ?? ?? ?? ?? Alex Welsch 7 ...read more.