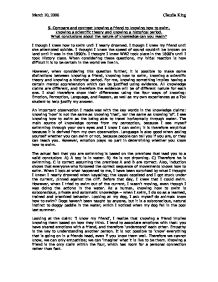 Compare and contrast knowing a friend to knowing how to swim,knowing a scientific theory and knowing a historical period.

9. Compare and contrast knowing a friend to knowing how to swim, knowing a scientific theory and knowing a historical period. What conclusions about the nature of knowledge can you reach? I though I knew how to swim until I nearly drowned. I though I knew my friend until she attempted suicide. I thought I knew the speed of sound couldn't be broken on land until it was in the 1990's. I thought I knew WW2 took place in the 1800's until I took History class. When considering these questions, my initial reaction is how difficult it is to be certain in the world we live in. However, when considering this question further, it is possible to make some distinctions between knowing a friend, knowing how to swim, knowing a scientific theory and knowing a historical period. For me, knowing something implies having a certain mental apprehension which can be justified using evidence. All knowledge claims are different, and therefore the evidence will be of different nature for each one. I shall therefore show their differences using the four ways of knowing: Emotion, Perception, Language, and Reason, as well as my own experiences as a Tok student to help justify my answer. ...read more.

Communication through emotion and language also enables us to reflect on our emotions. Based on past events, you decide you want as a friend, and come to the conclusion of whether they are your friend or not and whether you know 'them'. I often wonder how I know I can trust my emotions; even when we think we know someone we can be surprised: If knowing a friend is knowing the way they think, you can only predict their actions to a certain extent. For example, I though I knew my friend very well until she attempted suicide; I knew she was a smart and fun person, but I didn't know she had trouble at home. Every person's brain allows change of mind, because with emotions, there is an element of spontaneity, and the concept that nothing is pre-determined allows room for change. The ways of knowing associated with knowing a scientific theory are perception, reason and language. I think knowing a scientific theory is seeing it repeatedly in action, without failing. Seeing out of my own eyes is proof. For example, I have never seen gravity 'not working'; therefore 'I know' Newton's law of gravity. At school, we did two experiments involving the breakdown of starch into glucose: one with an enzyme solution and one without it. ...read more.

Whereas knowing a friend is based on empathy and knowing how to swim is based on experience and training, they can both by associated with the aspect of 'natural instinct', as well as something you learn 'how to do'; learning 'how to' know a friend, 'how to' swim. Knowing a scientific theory and a historical period depends on the transmission of knowledge through language, despite its problems, and depending on 'fact' to lead us to the truth by 'knowing that'. Additionally swimming and science can be tested, unlike the others. Knowledge is constantly updated and upgraded, similarly to a computer. The new and better knowledge replaces the old knowledge, to get the closest to the truth as possible. But although these are different claims requiring different ways of knowing to justify them, they have all have one thing in common; their nature: they are based on premises that we accept in every day life as being 'true' and therefore deduct that based on these premises, they are equally true. We know something as far as we are willing to accept it into our world. Reference: Theory of Knowledge, by Nicholas Alchin, published in London, 2003. Regarding the World - A primer for Tok, by Tony Stuart, published in Kent, 2000. Lonely Planets, by David Grinspoon, published in New York, 2004 www.ibtok.com www.digitalbrain.com ?? ?? ?? ?? March 10, 2006 Claudia King ...read more.