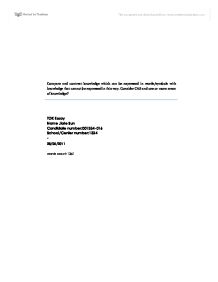 Compare and contrast knowledge which can be expressed in words/symbols with knowledge that cannot be expressed in this way. Consider CAS and one or more areas of knowledge? TOK Essay Name Jiale Sun Candidate number:001334-016 School/Center number:1334 - 28/05/2011 words count:1361 As an IB student, it is also our responsibility to discuss whether knowledge should be expressed in words (verbal expression) or not. In order to demonstrate this topic properly, I divide my essay into two parts. The first part is to make link between the topic and my real life. Then the second one is to address the knowledge issue : in our IB life, to what extent is verbal expression less reliable than non-verbal? Here I will consider CAS ( Creativity, Action, Science) and Nature Science So can knowledge be expressed in words/ symbols? Well, when I was a child, my teacher told me: "The most fundamental and useful way to learn Language is to know as many words/ symbols as possible. It just seem as constructing the building, as we know, a stable house needs sufficient number of bricks to build. So if we see a building as a way of learning language, the variety of bricks (word /symbols) ...read more.

Therefore, sometimes words and symbols are not the best way for us to present our meaning. Apart from this, there are some occasions that does not really need words and symbols. Instead, some visual image may stand for very specific and clear ideas: the image of man and woman on the door of public toilets indicates who is expected to use the facilities; a road sign that pictures falling rocks indicate a form of danger. Overall, in those places, the image might be more convenient than using words and symbols to express the thought and ideas. Furthermore, there are also some areas that do not really require the communication based on words and symbols. Art, for example, is only ever used as a non-verbal form of expression. The art works are basically judged by different people. They will see the meaning behind those images or pictures, and this does not need symbols and words to demonstrate it at all. It is only depends on people's perceptions. There is another interesting fact that human beings enter the world with no inborn capacity for language, they learn it though imitation and response. (Dombrowski, 2007)This leads to another question: can a baby use the words and symbols to present their knowledge and thought. ...read more.

Then we can write our report based our observations and investigations, and therefore refer the different method that combine both verbal and non0verbal expression to present our thought to others. Our perception can also prove that verbal and non0verbal expression are equally important to present our thoughts to others. This is because most significant scientific facts are firstly proved by perception of people then convinced by paper work. This is due to the fact that people like to believe what they see. For example, when the American Government launched the Manhattan plan to the Japan in the Second World War, less people were convinced of the effect of the nuclear bomb, this is because no one have actually seen it. Till whole city of Hiroshima are destroyed by the nuclear bomb, they were convinced of the fact that nuclear the bomb does exist. Thus, it is an obvious fact that verbal and non0verbal expression are equally important to present our thoughts to others. Taking all the factor into account, we can draw the conclusion that knowledge can be presented in both verbal and non-verbal expressions. There are many kn0wladge areas that can be expressed by either words/symbols or pictures. All in all, this just depends which kind of knowledge or field we are trying to express. ...read more.