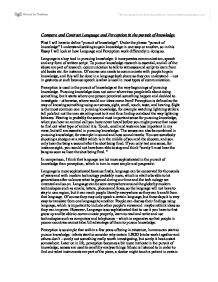 Compare and Contrast Language and Perception in the Pursuit of knowledge

Compare and Contrast Language and Perception in the pursuit of knowledge First I will have to define "pursuit of knowledge". Under the phrase "pursuit of knowledge" I understand seeking to gain knowledge in one way or another, so in this Essay I will look at how Language and Perception work differently in doing so. Language is a key tool in pursuing knowledge: it incorporates communication, speech and any form of written script. To pursue knowledge research is essential, and all of the above are part of research: communication to talk to witnesses and script to learn from old books etc. for instance. Of course one needs to communicate with people to gain knowledge, and this will be done in a language both share so they can understand - not in gestures or such because speech is what is used in most types of communication. ...read more.

If you only had one sense, for instance sight, you would not have been able to stop and think "surely I must hear the bang as soon as I see the shot being fired." In comparison, I think that language is a lot more sophisticated in the pursuit of knowledge than perception, which in turn is more simple and pragmatic: Language is more sophisticated because firstly, language can be conserved for thousands of years and with modern technology probably more, which is vital to be able to let generations after us know what happened during our time and the technology we invented and so on. Language can be sent everywhere around the globe by modern technologies such as emails, letters, phones and faxes, so the language will not have to stay in one region, but it can reach people literally everywhere so they can benefit from that language. ...read more.

Later on in life, perception becomes a bit more intricate in the pursuit of knowledge; senses are used to carefully analyse things: Music is listened to in order to find out what instruments are part of the piece, a doctor might touch a patient in certain places to find a broken bone or a tumour, the development of bacteria under a microscope can be watched carefully by a pharmacist to find out whether a medicine works or not, a fire-fighter can smell a burn and come to some sort of conclusion as to what is burning so that the right method of extinguishing the fire is used, and a wine taster uses his taste to find out whether the wine is good or bad, and what flavours are in it. The most important point though is that perception is the ground to being able to pursue knowledge by language, because everything has to be perceived first to be able to talk about it or write about it. Therefore I think both are important, perception being more basic and elementary and language the development thereof. ...read more.