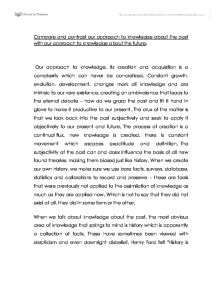 Compare and contrast our approach to knowledge about the past with our approach to knowledge about the future. Our approach to knowledge, its creation and acquisition is a complexity which can never be concretized. Constant growth, evolution, development, changes mark all knowledge and are intrinsic to our very existence, creating an ambivalence that leads to the eternal debate - how do we grasp the past and fit it hand in glove to make it productive to our present. The crux of the matter is that we look back into the past subjectively and seek to apply it objectively to our present and future. The process of creation is a continual flux, new knowledge is created, there is constant movement which escapes exactitude and definition. The subjectivity of the past can and does influence the basis of all new found theories, making them biased just like history. When we create our own history, we make sure we use bare facts, surveys, database, statistics and calibrations to record and preserve - these are tools that were previously not applied to the assimilation of knowledge as much as they are applied now. Which is not to say that they did not exist at all, they did in some form or the other. ...read more.

So, its not an exaggeration to say that all knowledge is based on a convoluted and circuitous method of accrediting, filtering, and deleting our perceptions about the world. Hints, clues, and even guesswork, obtained and retained, continue to fuel most of our knowledge irrespective of the areas of knowledge or of the ways of knowing. Michel De Nostredam is being talked about again because he's known to have predicted many major world events like the 9/11 disaster even though his prediction was not absolute and precise. It was a very vague description of the event and the disaster didn't happen the way he had predicted it to happen but certain parts in his premonition provide enough evidence that it is the World Trade Centers that he 'saw' being brought down. At forty-five degrees latitude, the sky will burn, Fire approaches the great new city.1 The common grounds that the past and future tread on, with the interface of knowledge playing its light footed role, is that we have depended on the collection of facts in the past and will continue to do so. "My interest is in the future because I am going to spend the rest of my life there." ...read more.

The one who did it the fastest would win the title of being the best loved son of Shiva. While Kartikeya whizzed around the world, Ganesh kept sitting. Just as he was about to complete the third circle around the world, Ganesh got up and went around his parents, Shiva and Parvati thrice and said "I won." The logic he gave to a petulant brother was "you went around 'the' world, I went around 'my' world. This ancient 'truth' is exactly how the present is functioning for most of us and the future will evolve based on this belief. This draws attention to the state of human psyche today, it is 'my' world, 'my' thoughts, 'my' is most important and all knowledge from the past will be scanned to suit this to apply it to 'my' future. Indians believe that the Indus valley civilization is the pioneer, the source of all other civilizations. We also believe that in the future, India is going to emerge as a super power. This may be illogical and only partially true, but we are objectively collecting knowledge and moving steadfastly in the direction of fulfilling that dream. We have the history and we have hope for the future, we just need the correct perspective. ...read more.