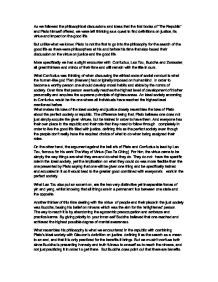 As we followed the philosophical discussions and ideas that the first books of 'The Republic' and Plato himself offered, we were left thinking as a quest to find definitions on justice, its virtue and impact on the good life. But unlike what we know, Plato is not the first to go into the philosophy for the search of the good life as there were philosophers at his and before his time that also based their discussion on the virtue on justice and the good life. More specifically we had a slight encounter with Confucius, Lao Tzu, Buddha and Zoroaster, all great thinkers and minds of their time and still remain with the title in ours. What Confucius was thinking of when discussing the ethical code of social conduct is what the human-like god T'ien (Heaven) had originally imposed on humankind. In order to become a worthy person one should develop moral habits and abide by the norms of society. ...read more.

They do not have the specific role in the ideal society, yet the implication on what they could do was more flexible than the one presented by Plato saying that one will be given one thing and be specifically trained and educated in it so it would lead to the greater good combined with everyone's work in the perfect society. What Lao Tzu also put an accent on, are the two very distinctive yet inseparable forces of yin and yang, whilst knowing that all things are in a permanent flux between one state and the opposite. Another thinker of this time dealing with the virtue of people and their place in the just society was Buddha, basing his belief on nirvana which was the aim for the 'enlightened' person. The way to reach it is by abandoning the egocentric preoccupation and embrace and practice karma. By giving priority to your inner-self Buddha believed that one reached and achieved the highest possible degree of mental awareness. ...read more.

Plato's 'noble lie' closely represents what Zoroaster brought up in the Philosophy world as to how a person should act. How they differentiate each other is that the latter has nothing to do with bad or good but a person's classification in a society, where Plato's myth shows where certain people belong, and why they're destined to live in this class and how act upon their role. When we compare all of the ideals and thought brought up by all these great thinkers, we can come up with a fine definition as to how an ideal society looks like, but it still brings the confusion as to how we should and could define justice. They lead us on the way to live a just and fulfilled life with the virtues we acquire, with the place we have in our society and the differentiation we make between what is good and what is bad, neither having to be clearly just. ...read more.