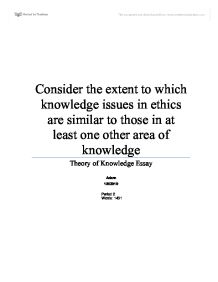 Consider the extent to which knowledge issues in ethics are similar to those in at least one other area of knowledge Theory of Knowledge Essay Adam 1/6/2010 Period 2 Words: 1431 " We are discussing no small matter but how we ought to live" (Socrates, Plato's Republic 390 BCE) Throughout history it has been seen that the ethics or the morality of a person has influenced their actions. An example of this is Al Qaeda; they believe that Americans are disrespectful and thus they antagonize them; therefore they destroyed the Twin Towers. Human science is the study of humans and their actions, it has existed since the dawn of time and is the reason we know so much about great people and their actions in the past. Ethics play a role in almost every aspect of our life and can be related to virtually every other area of knowledge. The cases of Capital punishment and abortion are two of the highly debated topics in present society and they bring forward serious moral questions: In today's society is capital punishment a viable solution? And how do we know if a person's choice in life if ethical? This essay will explore the link between ethics and human sciences. Knowledge issues in ethics are similar to those in human science. In today's society crime is a common occurrence and the forms of punishment are fairly consistent throughout most countries. ...read more.

They may have economic feelings but in order to occupy their job their ethics must be geared towards getting justice served at all costs, and they would argue that you cannot put a price tag on justice. They would claim that retribution for the families of the victims outweighs any cost that you can put on executing a convict. When presented with the option of hanging, he/she would rebut you by saying that it is inhumane. Regardless of the cost the inmate deserves a respectable way to die. Their ethical implications and perceptions would lead them to make sure justice is served out in a humane way regardless of the cost. An economist would refute the claims of the attorney general in order to prove his/her view as more logical. I would argue that the actions that they committed that led them to be executed surely were not humane nor was it giving the victim a respectable way to die. Hanging would be cost effective and it would get the job done. The economist's ethics would lead them to fight for their ideologies or morals. In the modern world, unwanted pregnancy is becoming more of a nuisance resulting in a higher abortion rate. Abortion involves the termination of a foetus resulting in the end of a pregnancy. There have been heated debates on the topic and two standpoints have emerged on it: pro-life or against abortion and pro-choice or for abortion. ...read more.

To this counterclaim, the pro-life side would say that human cells are still living beings. Amputation is for the betterment of a human being while abortion is killing a human being. It has been proven that, as a foetus, you gain sensory knowledge as you develop, thus John Locke's argument is false. Finally a foetus does have rights as this is why when someone murders a pregnant mother they are also charged with infanticide. The pro-life side would argue to prove their ideology superior to that of the pro-choice. All in all, two main concepts have been introduced in this essay. The main picture that is painted here is that ethics and human science go hand in hand. Human science is the study of human actions, while ethics is ones morality and it influences all decisions that we make. There is never a right or wrong answer when referring to your ethics; this is what human science strives to prove. The arguments of capital punishment and abortion are two of the many knowledge issues that are intertwined between both areas of knowledge but these examples prove that there is a relation between the two areas of knowledge as people's actions are influenced by their ethics. In the words of Valdemar Setzer, "ethics is not definable, is not implementable, because it is not conscious; it involves not only our thinking, but also our feeling" and because of that our actions are derived from ethics. ...read more.