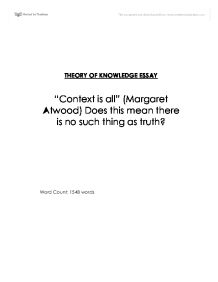 THEORY OF KNOWLEDGE ESSAY "Context is all" (Margaret Atwood) Does this mean there is no such thing as truth? Word Count: 1548 words "There is no such thing as inaccuracy in a photograph. All photographs are accurate. None of them is the truth."1 This aphoristic statement of Richard Avidon creates ripples of doubt in even the most believing minds. Truth knows dimensions beyond a single person's imagination. Ancient wisdom tells us 'to each his own'. It could well be speaking of truth. Many a great thinker has tried to explain and justify truth as they have seen it. To Mahatma Gandhi, truth was God and truth alone can lead to knowledge. According to John Keats aestheticism was all which can be perceived in his statement, "Beauty is truth, truth beauty that is all Ye know on earth, and all ye need to know."2 So when the context changes from that of a philosopher to that of a poet the definition of truth changes. Truth is almost a mirror image of reality-true and yet not, in all senses of the word. To a three year old, Santa Claus is a friendly, gift-giving figure; to a ten year old it's his father dressed in a Santa suit, and to a forty year old who enacts Santa at the local stores, its livelihood. ...read more.

Thus the two seeming contradictions are true in different lights. Knowledge has many areas from objective sciences, to doubtful history and downright subjective arts. Truth has been explained and questioned over different fields of knowledge. Mathematics is a field which claims to deal with constants and irreversible truths. V-1 is never introduced as a number; in fact children, while identifying numbers cancel it out as non existent. It is in all truth; just non existent for it is an imaginary number. And imagination is rightly said to hold no truth. Yet, it is commonly known as iota to most mathematicians and used in various 'unquestionable' mathematical calculations. The Fermat Theorem is a truth, because mathematicians believe it exists, yet it lies unproven all this time. The truth here is the irony of this subject. History is said to be an unvarying compilation of facts. Even then, history is always colored with perceptions of those who authorize it, those who write and those who read it. Max Mueller suggests that the Indic civilization actually found its roots in Iran. People migrated from there and walked into the cities of Dravidians. ...read more.

Mirage is the curse of perception, as deluded people have died chasing it. For a person suffering from color-blindness, who views the world in shades of grays and blacks, the truth that grass is green has no value. Truth is said to change with emotions. James Lange's theory proposes that a man acquires the same emotions as the person he is with9. In Alice Walker's "The Color Purple", the writer presents us with the truth that Celie and Shug Avery are rivals, being the wife and the mistress of the same man. But the desperation and tears of the wife evoke an empathetic reaction in the mistress and the context of their relationship changes. Correspondingly, the writer's earlier truth also changes as a long term friendship is forged between the rivals. Knowledge has time and again questioned truth. Our own conscious and sub-conscious minds battle the truth. But there is absolutely no doubt about the fact that what we know as truth undergoes changes when our times or environment change. Though not all truth will change, it may be perceived differently from what it is today. The light that shines defines the object underneath. Similarly the context of reference will define the truth of things. We cannot say that truth does not exist but we can say that it is not an absolute and immutable reality. ...read more.