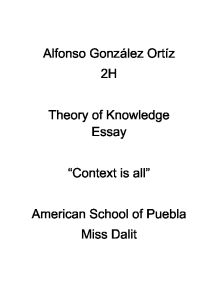 Alfonso Gonz�lez Ort�z 2H Theory of Knowledge Essay "Context is all" American School of Puebla Miss Dalit "Context is all" (Margaret Atwood). Does this mean that there is no such thing as truth? When you process this statement and this question in your brain you immediately try to understand all words in the phrase and define them so then you can get a complete understood conclusion of everything. In the first place let's define the word context as the part of a text or statement that surrounds a particular word or passage and determines its meaning. For someone to understand something you must first look where that something is taking place. For example if you say "Chile" you need to know the surrounding of that word because it has two meanings; a kind of vegetable and a country in South America. If you don't take a look outside that word you won't be able to understand it. The other important word to define in this statement is "truth". There are basically two types of truth. The first one is your own perception of things and you say it is true for the perspective of your own person. ...read more.

Now that we have defined the important words in this statement we can observe how context matter in different areas of life. In some aspects like math the context of the problem will not affect the result of itself. I the other hand if we take for example the theme of some kind of history you are in the need to establish the environment of what you are talking about for someone to understand the context. We can conclude from this paragraph that in some cases there is no such thing as truth but in some others it does exist but not completely. The truth can vary, and there is no such thing as a one hundred percent true statement. Why do I say this? Simply, there will be always different opinions of people about everything and depending on the time and the place you are it will be the kind of truth you are going to obtain. Let's get an example of religion vs. physics. If we get as an example the creation of man, religion and the science of physics will say a completely different statement. ...read more.

If we now think about such an area as arts, there are some similar troubles there as well. If one wants to interpret a painting, or a musical composition, to find out what the artist meant by his creation, many things have to be taken into account: such as the time when he lived, his country of birth and residence, and whatnot. For example if we think what the Spanish architect Antonio Gaud� would design, we would be mistaken trying to deduce that his style was similar to ones of other architects of the same epoch and origin. He spent a lot of time alone, and therefore developed an extremely original style of his own. If one was to attempt to comment on any of Gaud�'s creations, he would be in trouble without a proper research in advance. This implies to many cases in analytical criticism - no stereotypes should be made to achieve a reasonable result, and as much background information as possible about the artist should be taken into account to compile an objective result. You can firmly say that there is no such thing as a completely true thing in the whole world. http://www.coursework.info/International_Baccalaureate/Theory_of_Knowledge/ http://en.wikipedia.org/wiki/Truth http://en.wikipedia.org/wiki/Context http://www.wacc.org.uk/wacc/publications/media_development/archive/1997_3/truth_in_context_or_what_does_truth_mean http://redescolar.ilce.edu.mx/redescolar/act_permanentes/historia/histdeltiempo/mundo/prehis/t_evolu.htm http://www.adorador.com/temasdoctrinales/25_el_hombre_su_creacion.htm ...read more.