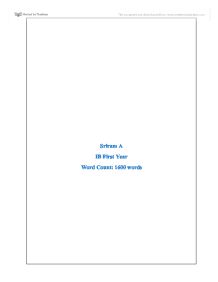 Context is all. from the novel The Handmaids Tale by Margaret Atwood brings a curious topic into light and presents a challenging question: Is there no such thing as truth?

Sriram A IB First Year Word Count: 1600 words Theory of Knowledge Essay: "CONTEXT IS ALL" (MARGARET ATWOOD). DOES THIS MEAN THAT THERE IS NO SUCH THING AS TRUTH? "Context is all." from the novel "The Handmaid's Tale" by Margaret Atwood brings a curious topic into light and presents a challenging question: Is there no such thing as truth? This inquiry deserves much thought and contemplation regarding definitions of truth and context and how they are inter-related. The problems of knowledge that arise from such situations are: 1. What do we mean by a contextual framework? 2. Are the so called "absolute truths" completely independent of context? 3. What is the role of context in determining the truth? 4. Does the nature of truth attained depend on the truth's dependence or independence of context? 5. Can there really be existent a truth devoid of all contexts? Let me start by defining context. Noel Williams(1) writes: Context may refer to the following: * The linguistic context * The physical situation (time, place, setting, speaker etc); * The historical circumstances leading to the communication * Ethnic Background * Cultural Beliefs * Personal Bias My definition of context will also encompass all these criteria. ...read more.

Thus, context is vital in determining the truth behind any event of the past. Religion too is dependent on context for attainment of truth. People resort to the religion that has practices that they believe will lead them to truth. People's attitudes and beliefs are altered by the context of the religion that they follow, which is truth to them. For example, Hinduism follows the universal law of Karma. This states that the soul is eternal and it enters a body and the course of life of this body will be a result of the actions committed in the previous life. This concept is known as 'reincarnation'. On the other hand, Abrhamic religions of Judaism, Christianity and Islam follow that the soul only exists for one lifetime. This concept of 'last judgement' says that, "Immediately upon death each soul undergoes the particular judgment, and depending upon the state of the person's soul, goes to heaven, purgatory, or hell."(4)As a result, in religion, context is all. Another area of knowledge where truth is attained through context is art. My interpretation of Mona Lisa, by Da Vinci forms the perfect example. I cannot be blamed for considering it remarkable that a painting displaying an ordinary lady achieved such world wide acclaim. ...read more.

as 'charioteer', the mind as 'reins' and senses as 'horses'". This statement of the Katha Upanishad tries to convey that 'self' is the absolute truth. We fail to realize that the self is a silent partner in all our deeds and quests of knowledge. Its existence is not contextual. It has been rightly said in Isha Upanishad(8), The seeker prays to Brahman,' The face of truth is hidden behind your golden lid. May you remove the lid so that I may see the Golden Truth!' And when the request is granted and the splendour manifests Itself in him he, submerged in pure bliss, lets out these words, "In truth I am Him." This is the ultimate truth. The self is Lord himself, eternal and context independent. I hope that I have been successful in showing that a contextual account of truth is not only convincing and logical but also leads to a development of a science of truth. It provides the missing half of the picture of truth that is not explicitly evident but is essential for a true truth! On the other hand, the existence of absolute truths in itself is a big question mark. As aforementioned, I could find convincing explanations on its existence only in the Hindu scriptures and have tried my best to do justice to what these scriptures have to convey. ...read more.