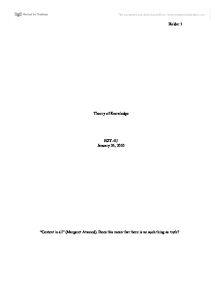 For example in western society this practice is very uncommon but in most eastern societies arranged marriages are encouraged and it is a very common practice. Thus, society's different views on such a topic would elicit different versions of truth from different people. This would occur because of the different societal views that people have been raised in. The context in this case would be the views of the society which in turn would influence their views on arranged marriages. Therefore, truth that is socially acceptable also depends on its context. Therefore, context and truth are both terms that rely on each other to be understood. Without context it would be difficult to understand the truth. Objective truth as well as socially acceptable truth both rely on context to be understood and depend on each other to provide the reader with the clear meaning. Since, truth can not be understood without context then I believe that no such thing as truth exists. A fact that is considered true now may not be considered true later because of different contexts. Therefore, it is safe to say that the context determines the truth so, no such thing as truth exists. ?? ?? ?? ?? Haldar 1 ...read more.