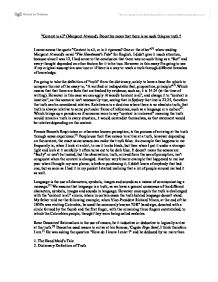 &quot;Context is all&quot; (Margaret Atwood). Does this mean that there is no such thing as truth ?

"Context is all" (Margaret Atwood). Does this mean that there is no such thing as truth ? I came across the quote "Context is all; or is it ripeness? One or the other"[1] when reading Margaret Atwood's novel "The Handmaid's Tale" for English. I didn't give it much attention, because since I was 12, I had come to the conclusion that there was no such thing as a "fact" and every thought depended on other factors for it to be true. However in this essay I'm going to see if my original assumption was true or if there is a way to reach a truth through different branches of knowledge. I'm going to take the definition of "truth" from the dictionary, solely to have a base for which to compare the rest of the essay to; "A verified or indisputable fact, proposition, principle"[2].Which means that that there are facts that are backed by evidence, such as; it is 14:24 (at the time of writing). However in this case we can apply Atwood's 'context is all', and change it to "context is location", as this scenario isn't necessarily true, seeing that in Sydney the time is 22:25, therefore the truth can be considered relative. ...read more.

Once again I came to the conclusion that context will undermine truth. Emotions, feelings and intuition is the expression of a person's mental state, normally based on the person's internal (physical) and external (social), sensory feeling.[8] We use emotions to determine our personal state of mind, we can be angry, sad and confused; and through emotion we can arrive at the truth that we are depressed. Regardless this truth only remains legitimate if the causes of the emotions remain constant. Likewise in the case we change the context of the situation, such as instead of it raining it were sunny, that person wouldn't feel as depressed and a new truth would emerge. Ethics is the study of morality; analysing if behaviour, thoughts and actions are "good" or "right" as opposed to "bad" and "wrong."[9] Ethics plays a major role in the modern world as every public and social source, especially the media, are advertising what is nice and evil, good and bad, right and wrong. It is like the legal system, but it is more vague and theoretical also the consequences tend to be social as opposed to being sent to jail. Ethics are open to interpretation by each individual each society or even a culture as a whole. ...read more.

Multiplying both sides by 3 we get: 1 = .999... Therefore: 1 + 1 = 2 We know the first equation is a truth as we have been taught this in school and the world of mathematics revolves around that equation being valid. However using mathematical induction and rationalisation we have induced that the last equation is also valid. Nonetheless we arrive to the conclusion that they both can not be equal in a same frame of reference. Once again Margaret Atwood, shows that the truth as we know it, can't be absolute as it varies depending on the context in which it is proposed. Answering the question "Does this mean that there is no such thing as truth ?" I believe there is always a truth as depending on the context, any situation can be 'manipulated' to arrive at a truth. However I don't think Universality[14]; an idea which is universal, and exists everywhere, throughout the Universe nor an Absolute Truth exists, as the value of every thought changes depending on the context. As the Relativists would say; it's all Relative. I think a more appropriate title would have been: "Does this mean there is no such thing as an absolute truth ?" as the use of "Context is all" allows for there always to be a truth but not one that is absolute. ...read more.