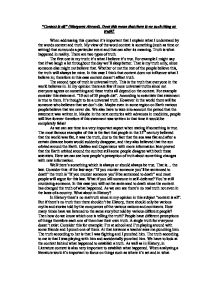 "Context is all" (Margaret Atwood). Does this mean that there is no such thing as truth? When addressing this question it's important that I explain what I understand by the words context and truth. My view of the word context is something (such as time or setting) that surrounds a particular event and that can alter its meaning. Truth is what happened in reality. There are two types of truth. The first one is my truth: it's what I believe it's true. For example I might say that if we laugh a lot throughout the day we'll sleep better. That is my truth only, since someone else might not believe that. Whether or not the rest of the people believe this, the truth will always be mine. In this case I think that context does not influence what I believe in; therefore in this case context doesn't affect truth. The second type of truth is universal truth. This is the truth that everyone in the world believes in. In my opinion there are few if none universal truths since not everyone agrees on something and these truths all depend on the context. For example consider this statement. ...read more.

Here we can see how people's perception of truth about something changes with new information. Well there's something which is always or should always be true. That is... the law. Consider this: if the law says: "If you murder someone you'll be sentenced to death" the truth is "If you murder someone you'll be sentenced to death" and most people will argue for this law. What if you kill someone in self-defense? You're still murdering someone. In this case you will not be sentenced to death since the context has changed the truth of what happened. As we can see there's no real truth not even in the laws of a country. What about in History? In History there's no real truth since in my opinion in this subject "context is all". But if there's no truth then there shouldn't be History, there should only be various myths and stories told by the conquerors of the various nations and continents. How many times have we listened to the same story but told by various different people? Then how do we know which one is telling the truth? ...read more.

On the other hand if we move from literature to numbers, logically 2 plus 2 will always equal 4 and 2 times 2 will always equal 4 as well, in any part of the world at any period during time no matter what the context is. Not really...It depends on what you're talking about, the context. Consider this for example: (In Physics 20�C=293K and 40�C =313K). If today I have 20 (apples) and tomorrow I have 40 (apples) then tomorrow I'll have twice as many (apples). If the temperature yesterday was 20 (�C) and the temperature today is 40 (�C) the temperature is not twice as more since 313K is not twice 293K. As we can see it's important to look at the context and see what we're talking about! After thoroughly thinking about this issue I've reached some very interesting conclusions. In general "context is all" there's no doubt about that, which means there's no truth, which in turn means that History shouldn't exist and it also means that 20 x 2 does not equal 40. However that doesn't apply to my personal truth of some things in life since I believe that my truth is not always affected by the context. ...read more.