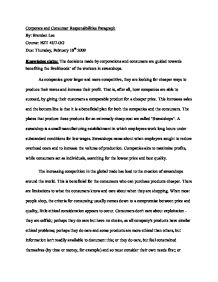 Corporate and Consumer Responsibilities Paragraph By: Brendan Lee Course: HZT 4U7-GG Due: Thursday, February 18th 2009 Knowledge claim: The decisions made by corporations and consumers are guided towards benefiting the livelihoods' of the workers in sweatshops. As companies grow larger and more competitive, they are looking for cheaper ways to produce their wares and increase their profit. That is, after all, how companies are able to succeed, by giving their customers a comparable product for a cheaper price. This increases sales and the bottom line is that it is a beneficial plan for both the companies and the consumers. The places that produce these products for an extremely cheap cost are called "Sweatshops". A sweatshop is a small manufacturing establishment in which employees work long hours under substandard conditions for low wages. ...read more.

and so must consider their own needs first; or maybe they're simply not aware that exploitation exists, or are unable to make the link between their own consumption and the processes required to get a product to market. While they may care about the quality of life for the workers there are also looking out for themselves. The growing dominance of trade has pushed companies to focus on whatever advantages they might need to remain globally competitive. The critics of sweatshops and human rights activists argue that these factories cause problems for the workers later in the worker's life. Occasionally these problems lead to death. These problems are not beneficial to the workers and, as a result we have problems with the methods of justification. ...read more.

For example, the conditions of the factories are not safe for anyone to work in. The factories are not kept clean, so many workers contract diseases making it easier for anyone to become ill. The chemicals used in the factory give off many fumes, which make people sick. Many workers become ill and are not able to go home. In conclusion I believe it is the employer's main objective is to sell as much of the product as they can, the factories hire many people to get more of their product produced. The more workers they hire, the less the money they are willing to give their workers. And the consumers are looking out for themselves ahead of all else, in the end the corporations and the consumers benefit workers only because and only to extent that is profitable to do so. ...read more.