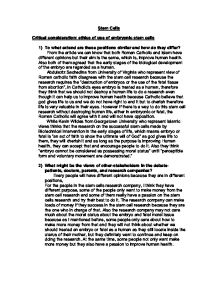 Critical consideration: ethics of use of embryonic stem cells

Stem Cells Critical consideration: ethics of use of embryonic stem cells 1) To what extend are these positions similar and how do they differ? From the article we can know that both Roman Catholic and Islam have different opinions but their aim is the same, which is, improve human health. Also both of them agreed that the early stages of the biological development of the embryo are regarded as a human. Abdulaziz Sachedina from University of Virginia who represent view of Roman catholic faith disagrees with the stem cell research because the research requires the "destruction of embryos or the use of the fetal tissue from abortion", in Catholic's eyes embryo is treated as a human, therefore they think that we should not destroy a human life to do a research even though it can help us to improve human health because Catholic believe that god gives life to us and we do not have right to end it but to cherish therefore life is very valuable in their eyes. However if there is a way to do this stem cell research without destroying human life, either in embryonic or fetal, the Roman Catholic will agree with it and will not have opposition. ...read more.

for the research is from the destruction of embryos and fetal issue from abortion, I think most of the doctors will agree with the stem research because they hope that the stem cell can really use to help the people who is suffering. Doctors obviously did not want to destroy a life but if the investigation is significant, I think they would consider and the embryos and fetal that used to do the research would worth it. Also the doctors must find stem cells so interesting because stem call has a potential for tissue repair and for treating s variety of degenerative conditions. I think the situation for parents and doctors are pretty much the same, assume that the parents of the patient, they definitely want the stem cells research to keep going on if their children or family members have disease like leukemia because they may need the help of stem cells to insert to their bone marrow to produce new cells or people who got disease need to transplant or ancer treatment. We should stand in their shoe and understand their feeling; they definitely want their children or family members to recover as soon as possible. ...read more.