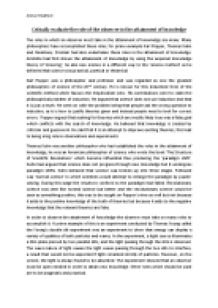 He believed that knowledge is created by criticism and guesswork. He said that it is an attempt to disprove existing theories, this lead to being a big role in observations and experiments. Thomas Kuhn was another philosopher who had established the roles in the attainment of knowledge; he was an American philosopher of science who wrote the book ?The Structure of Scientific Revolutions? which become influential thus producing the ?paradigm shift?. Kuhn had argued that science does not progress through new knowledge but it undergoes paradigm shifts. Kuhn believed that science was broken up into three stages. Followed was ?normal science? in which scientists would attempt to enlarge the paradigm by puzzle- solving. During this stage the results to conform to the paradigm had failed. ...read more.

In the experiment, a light source illuminates a thin plate pierced by two parallel slits, and the light passing through the slits is observed. The wave nature of light causes the light waves passing through the two slits to interfere, a result that would not be expected if light consisted strictly of particles. However, on the screen, the light is always found to be absorbed. The experiment showed that an observer must be open minded in order to attain new knowledge. Other roles which should be used are to be pragmatic and practical. Overall there are many roles in which an observe much accomplish to the attainment in knowledge as they should be able see the errors in theories and correct them with an open, pragmatic, realistic mind. ...read more.