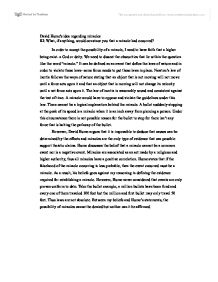 David Hume's idea regarding miracles KI: What, if anything, would convince you that a miracle had occurred? In order to accept the possibility of a miracle, I need to have faith that a higher being exist- a God or deity. We need to dissect the obscurities that lie within the question like the word "miracle." It can be defined as an event that defies the laws of nature and in order to violate these laws- some force needs to put these laws in place. ...read more.

The law of inertia is reasonably sound and consistent against the test of time. A miracle would have to oppose and violate the guidelines under this law. There cannot be a logical explanation behind the miracle. A bullet suddenly stopping at the peak of its speed is a miracle when it is an inch away from piercing a person. Under this circumstance there is not possible reason for the bullet to stop for there isn't any force that is halting the pathway of the bullet. ...read more.

Hume states that if the falsehood of the miracle occurring is less probable, then the event occurred must be a miracle. As a result, his beliefs goes against my reasoning in defining the evidence required for establishing a miracle. However, Hume never considered that events are only proven uniform to date. Take the bullet example, a million bullets have been fired and every one of them traveled 100 feet but the million and first bullet may only travel 50 feet. Thus laws are not absolute. Between my beliefs and Hume's statements, the possibility of miracles cannot be denied but neither can it be affirmed. ...read more.