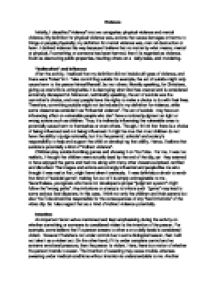 Violence Initially, I classified "violence" into two categories: physical violence and mental violence. My definition for physical violence was, actions that cause damages or harms to things or people physically; my definition for mental violence was, mental destruction or harm. I defined violence this way because I believe that no matter by what means, mental or physical, if something or someone has been harmed, then it is regarded as violence. Such as destructing public properties, insulting others on a daily basis, and murdering. "Indirection" and Influence After the activity, I realized that my definition did not include all types of violence, and there were "holes" in it. Take committing suicide for example, the act of suicide might only cause harm to the person himself/herself, but not others. Morally speaking, for Christians, giving up one's life is unforgivable, it is destroying what God has created and is considered extremely disrespectful. Moreover, technically speaking, the act of suicide was the committer's choice, and most people have the rights to make a choice to do with their lives. ...read more.

So I also regard that as a kind of indirect violence potentially. Intention An important factor we've mentioned and kept emphasizing during the activity on whether something or someone is considered violent is the intention of the person. For example, some believe that if a person swears to others on a daily basis is considered violent. However if he/she is not under control due to some biological reason, then I will not take it as a violent act. On the other hand, if it is under complete control and no extreme emotional pressure, then the person is violent. Here, there is a matter of whether the person intends to swear. The intention of swearing may cause trouble, whereas swearing under medical conditions without intention is understandable to me. Another case would be a situation of some people "plotting to place a nuclear bomb in a public area" and "threatening to place a nuclear bomb in a public area". The former does not involve any physical actions; it is the "plotting" of placing a nuclear bomb in a public area which causes potential threat only if it is actually being placed there. ...read more.

I can understand why some people including me sometimes, associate pictures of intense physical contact with violence. It can be seen in newspapers. The pictures of the strikes in China and Japan fighting over the DiaoYu Island/Senkaku Island vary in different newspapers: the Canadian Press displayed a picture indicating "rational Japanese strikers protesting calmly on the streets", while the "irrational Chinese strikers scatter all over the place and wreck Japanese stores". Pictures can be extremely biased, depending on different stances of the publishers. But what's more important is that our interpretations from the pictures are different due to different culture backgrounds, education levels, belief systems or moral values, stances, etc. It is true that what seems "violent" to me may not be regarded violent to others. Conclusively, due to the above "realizations", I have made the following amendments to my definition of violence: Violence is an actual action or influential action of causing physical/psychological damage or further destruction to someone, something, or oneself, either directly or indirectly, but this definition may vary from one another depending on different individual interpretations. ...read more.