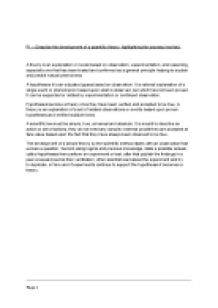 ﻿P1 ? Describe the development of a scientific theory, highlighting the process involved. A theory is an explanation or model based on observation, experimentation, and reasoning, especially one that has been tested and confirmed as a general principle helping to explain and predict natural phenomena. A hypotheses it is an educated guess based on observation. It is rational explanation of a single event or phenomenon based upon what is observed, but which has not been proved. It can be supported or refuted by experimentation or continued observation. Hypotheses become a theory once they have been verified and accepted to be true, A theory is an explanation of a set of related observations or events based upon proven hypotheses and verified multiple times. A scientific law must be simple, true, universal and absolute. It is meant to describe an action or set of actions, they do not need any complex external proofs they are accepted at face value based upon the fact that they have always been observed to be true. The development of a simple theory by the scientific method starts with an observation that evokes a question. Second using logical and previous knowledge, state a possible answer, called hypotheses then perform an experiment or test, after that publish the findings in a peer-reviewed journal then verification, other scientist read about the experiment and try to duplicate, in time and if experiments continue to support the hypotheses it becomes a theory. ...read more.

I believed this simile largely speaks the truth. The green and budding twigs may represent existing species, and those produced during each former year may represent the long succession of extinct species...The limbs divides into greater branches, and these into lesser and lesser branches, were themselves once, when the tree was small, budding twigs, and this connexion of the former and present buds by ramifying branches may well represent the classification of all extinct and living species in groups subordinate to groups...From the first growth of the tree, many a limb and branch has decay and dropped off,and these lost branches of various sizes may represent those whole orders,families and genera which have now no living representatives, and which are known to us only from having been found in a fossil state. As buds give rise by growth to fresh buds, and these,if vigorous, branch out and overtop on all feebler branch, so by generation i believe it has been with the tree of life, which fills with its dead and broken branches the crust of the earth, and covers the surface with its ever branching and beautiful ramifications. (Charles Darwin, 1859) M1: Differentiate between a scientific question and a non-scientific question. A scientific question has a real answer that can be answered in a logical way, andit has been tested, and this means you can carry out an experiment or take measurements to answer the question. ...read more.

reviewers, the reviewers have a certain knowledge on the subject area, they will analyse the paper and see if everything is correct and if it there is nothing that Had been overlooked. After that the paper will come back to the editor where he will say if it need to be revised again or if he will accept it or reject it, then the article is returned to the researchers with the feedback and any request for review, she will revised it and send back to the editor, the editor will decide if he will publish it or not. D1: Explain why new theories are often resisted by the scientific community, and how unorthodox science discoveries eventually become accepted, using the concept of paradigm shifts and scientific revolutions, and how unorthodox science discoveries become accepted. The concept of falsifiability by Karl Popper It is the belief that for any hypothesis to have credence, it must be inherently disprovable before it can become accepted as a scientific hypothesis or theory. The idea is that no theory is completely correct, but if not falsified, it can be accepted as truth. Falsifiability is a useful tool for generating theories that are testable and realistic. If a falsifiable theory is tested and the results are significant, than it can become accepted as scientific truth. Falsifiability is very strict in its definitions and does not take into account that many sciences are observational and descriptive, ________________ Page ...read more.