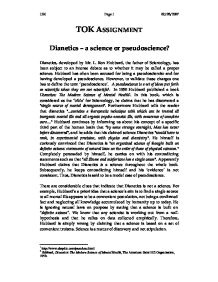 Dianetics - a science or pseudoscience?

TOK ASSIGNMENT Dianetics - a science or pseudoscience? Dianetics, developed by Mr. L. Ron Hubbard, the father of Scientology, has been subject to an intense debate as to whether it may be called a proper science. Hubbard has often been accused for being a pseudoscientist and for having developed a pseudoscience. However, to validate these charges one has to define the term 'pseudoscience'. A pseudoscience is a set of ideas put forth as scientific when they are not scientific1. In 1950 Hubbard published a book Dianetics: The Modern Science of Mental Health2. In this book, which is considered as the 'bible' for Scientology, he claims that he has discovered a "single source of mental derangement". Furthermore Hubbard tells the reader that dianetics "...contains a therapeutic technique with which can be treated all inorganic mental ills and all organic psycho-somatic ills, with assurance of complete cure...." Hubbard continues by informing us about his concept of a specific third part of the human brain that "by some strange oversight, Man has never before discovered", and he adds that his claimed science Dianetics "would have to rank, in experimental precision, with physics and chemistry". ...read more.

Science is a matter of discovery and not stipulation. Other questionable theses, declaring that Dianetics is a science, can be noticed. Hubbard's theory of the human mind has almost no overlap with our knowledge of the brain and modern neurophysiology. Hubbard states in his book that the mind has three parts. "The analytical mind is that portion of the mind which perceives and retains experience data to compose and resolve problems and direct the organism along the four dynamics. It thinks in differences and similarities. The reactive mind is that portion of the mind which files and retains physical pain and painful emotion and seeks to direct the organism solely on a stimulus- response basis. It thinks only in identities. The somatic mind is that mind, which, directed by the analytical or reactive mind, places solutions into effect on the physical level." According to Hubbard, the single source of insanity and psychosomatic ills is the engram. The engram postulate bases on, what Hubbard calls "scientific facts", but in reality they cannot be proved or disproved. Hubbard makes claims that common medical disorders are due to these engrams, which are to be found in one's "engram bank". ...read more.

He further claims that "Invariant scientific evidence as to the basic nature and functional background of the human mind." Additionally, his type of science is required to understand the "cause and cure of all psycho-somatic ills...." And shortly after, as if to protect himself against massive numbers of 'California-typic' law suits he contradicts himself by saying that it would be unreasonable to expect a science of mind to be able to find a single source of all insanities, since some are caused by "malformed, deleted or pathologically injured brains or nervous systems" and some are caused by doctors. He reveals the weakness of his own claims by reaching for the defensive position. He lacks of qualified arguments in order to persuade the intellectual and educated man. Example by example Hubbard cancels out his claim by defensive counter-statement, which he is forced to make due to his pseudoscientific positive hypotheses. Hubbard no scientist, but rather a man that attempts to trick, what one would call, less or misinformed people by disobeying all rules of conduct, of what we commonly know as science. http://www.skepdic.com/dianetic.html http://www.skepdic.com/psychoan.html http://www.xs4all.nl/~kspaink/cos/idx_essays.html 1 http://www.skepdic.com/pseudosc.html 2 Hubbard, Dianetics: The Modern Science of Mental Health, The American Saint Hill Organization, 1950. ?? ?? ?? ?? Emil Sierczynski Page 1 02/05/2007 ...read more.