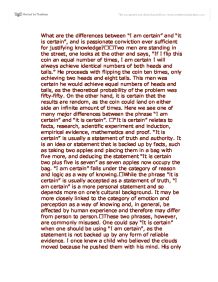 Difference of Truth and knowldge

What are the differences between "I am certain" and "it is certain", and is passionate conviction ever sufficient for justifying knowledge???Two men are standing in the street, one looks at the other and says, "If I flip this coin an equal number of times, I am certain I will always achieve identical numbers of both heads and tails." He proceeds with flipping the coin ten times, only achieving two heads and eight tails. This man was certain he would achieve equal numbers of heads and tails, as the theoretical probability of the problem was fifty-fifty. On the other hand, it is certain that the results are random, as the coin could land on either side an infinite amount of times. Here we see one of many major differences between the phrase "I am certain" and "it is certain". ?"It is certain" relates to facts, research, scientific experiment and induction, empirical evidence, mathematics and proof. "It is certain" is usually a statement of truth and authority. It is an idea or statement that is backed up by facts, such as taking two apples and placing them in a bag with five more, and deducing the statement "It is certain two plus five is seven" as seven apples now occupy the bag. "I am certain" falls under the category of reason and logic as a way of knowing.?While the phrase "it is certain" is usually accepted as a statement of truth, "I am certain" is a more personal statement and so depends more on one's cultural background. ...read more.

However, iIt is difficult to relate the statement to whether something is ethically wrong or right, as ethics and morals are a result of religion, culture and background, and therefore tend to vary from place to place and person to person. Therefore, when it comes to ethics ethics as an area of knowledge, passionate conviction can be used and it relates strongly to the statement "I am certain".?Whilst one traditionally thinks of science as objective and unemotional, passionate conviction is actually a key step in the development of theories and laws. The most widely accepted scientific method is as follows - a hypothesis is created, both controlled and independent variables are identified, the hypothesis is tested and the results are then analysed. After this final step the hypothesis is modified and retested, and the process continues until a theory is created. Passionate conviction comes in at both the beginning when the hypothesis is created, but also at the end when a scientist is convinced that the results came out as they did for whatever reason and attempts to show the scientific world that he is correct. It is only when the theory is challenged by the scientific community and they cannot disprove it that it becomes a "law". A law is considered "the truth" until it is shown to be false, which is still possible. ...read more.

Unless a person can provide mathematical proof to support their arguments then the statement "I am certain..." cannot be used as ato validation validate of knowledge. A mathematical proof has tomust be accepted by a large majority of people to be useful in supporting a statement. Using and repeating numerous steps and finding the idea works in multiple situations is the general idea of mathematical proof. If one is certain that they have the answer to y=x they will generally have to prove it before it is accepted as true. However, once it is proven in a number of ways understandable by others, one can then say "it is certain y=x". Most mathematical ideas were developed thousands of years ago, and have been tried and tested since. Unlike other areas where ideas and theories are constantly changing, mathematics has remained relatively the same, and is therefore the only area of knowledge where passionate conviction can hardly ever be used to justify knowledge.?Overall, "it is certain" is an example of reason and logic, where as "I am certain" is an emotion which relies on one's upbringing. Passionate conviction is used as the main justification of knowledge in the arts and in ethics, but in other areas such as history and science passionate conviction plays only a part in the validation of knowledge. In mathematics, passionate conviction fails to be useful to any extent. In conclusion, passionate conviction can be sufficient to justify knowledge in certain areas, but inadequate in others. ...read more.