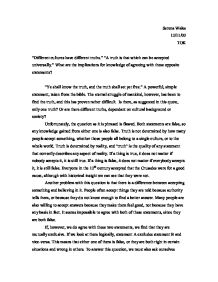 &quot;Different cultures have different truths.&quot; &quot;A truth is that which can be accepted universally.&quot; What are the implications for knowledge of agreeing with these opposite statements?

Serena Wales 12/11/03 TOK "Different cultures have different truths." "A truth is that which can be accepted universally." What are the implications for knowledge of agreeing with these opposite statements? "Ye shall know the truth, and the truth shall set yet free." A powerful, simple statement, taken from the bible. The eternal struggle of mankind, however, has been to find the truth, and this has proven rather difficult. Is there, as suggested in this quote, only one truth? Or are there different truths, dependant on cultural background or society? Unfortunately, the question as it is phrased is flawed. Both statements are false, so any knowledge gained from either one is also false. Truth is not determined by how many people accept something, whether those people all belong to a single culture, or to the whole world. Truth is determined by reality, and "truth" is the quality of any statement that correctly describes any aspect of reality. If a thing is true, it does not matter if nobody accepts it, it is still true. If a thing is false, it does not matter if everybody accepts it, it is still false. ...read more.

If different cultures have different truths on the same subject, than there is no truth. Just because my culture says that the world was created by God in seven days, that does not mean it is the truth. It is what we believe, but that does not make it true. Contrarily, scientists say that we evolved from lesser beings, and that the world was created through a 'big bang' which created the universe. This is what they believe to be the truth: it does not mean it is. If nothing can be agreed upon, and there are differing opinions, than there is no truth. The opposite statement, that truth is something that everyone agrees with, is more valid, at least in my opinion. Everyone can agree on some things, and would consider them truths: the world is round, people should be born with two eyes, the Second World War started in 1939. That there is a group agreement on these issues, from both those who are expert on these topics and amateurs, means that we can most likely accept them as being of reality. ...read more.

What is learned in an Ethics class is more a matter of cultural influences. People in Nigeria may believe that they have the right to stone a woman to death for adultery, while in Europe we would consider this a most improper thing to do. In Japan, it is considered rude to look a superior in the eye whist talking to them, but in America it would be considered rude to not face them. Because of these differences, it is most certainly not true to state that "Looking someone in the eye is rude.", although that is the truth of the culture. As I said earlier, truth cannot be changed. What would be correct is to state that "In Japan, looking someone in the eye is rude." This is true everywhere to everyone. These two statements also come from opposite schools of philosophy: those that believe in subjective truth and objective truth. To agree with both of these statements is impossible, since they both contradict each other. Agreeing with either of them, however, is also wrong. Even if no one knows the absolute truth about something yet, that does not mean that the present answers are a suitable replacement. Truth does not change, no matter who accepts it. ...read more.