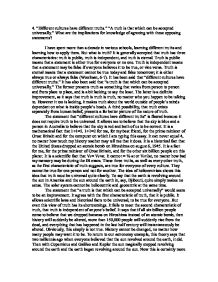 4. "Different cultures have different truths." "A truth is that which can be accepted universally." What are the implications for knowledge of agreeing with these opposing statements? I have spent more than a decade in various schools, learning different truths and learning how to apply them. But what is truth? It is generally accepted that truth has three characteristics: truth is public, truth is independent, and truth is eternal. Truth is public means that a statement is either true for everyone or no one. Truth is independent means that a statement may be false if everyone believes it to be true, or vice versa. Truth is eternal means that a statement cannot be true today and false tomorrow; it is either always true or always false (Woolman, 6-7). It has been said that "different cultures have different truths." It has also been said that "a truth is that which can be accepted universally." The former presents truth as something that varies from person to person and from place to place, and is a bit lacking to say the least. The latter is a definite improvement, as it says that truth is truth is truth, no matter who you happen to be talking to. ...read more.

It agrees with the first characteristic of truth, that it is public. It allows scientific laws and historical facts to be universal, to be true for everyone. But even this view of truth has its shortcomings. It fails to meet the second characteristic of truth, that truth is independent of anyone's belief. It says that if all six billion people come to believe that we dropped bananas on Hiroshima instead of an atomic bomb, then history will suddenly be altered, more than 150,000 people will suddenly rise from the dead, and everything that has happened in the last half century will instantaneously be altered. Obviously, this simply is not true. History cannot be changed, no matter how many people may want it to be. To return to our astronomy example, this theory says that two millennia ago when everyone believed that the sun revolved around the earth, it did. Then with Copernicus and Galileo and Kepler the sun magically stopped revolving around the earth and the earth began revolving around the sun. Now this is certainly more coherent than the idea that solar system is simultaneously geocentric and heliocentric, but it still contradicts observations made prior to Copernicus, the laws of physics, and common sense in general and therefore cannot be correct. ...read more.

My sister, while having spent some time in orchestra, spends far too much time (at least in my opinion) listening to more recent music. Does the fact that we appreciate different types of music, that what I think is good she thinks is bad and vice versa, make one of us right and one wrong? Of course not. Ethics, like arts, would seem support the idea that different cultures have different truths. For example, in the current debate on abortion, some people would tell you that the baby has a right to live, whether the mother likes it or not. Others would tell you that the mother has a right to decide what happens within her own body, even if that causes the fetus to die. Is one side inherently more right than the other? Probably not. In these two fields, it seems that truth is different for different people, because these two fields deal with concepts created and defined by humans: good and bad, better and worse, right and wrong. When it comes to real truth, truth in fields dealing with the world outside the human mind, truth cannot be different for different cultures, and it cannot be that which is believed by all cultures. Truth is public and eternal, and most importantly is independent of what anyone believes. ...read more.