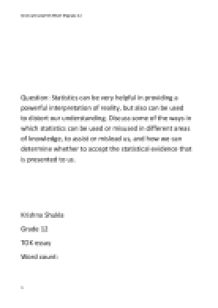 Discuss some of the ways in which statistics can be used or misused in different areas of knowledge, to assist or mislead us

﻿Krishna ShuklaTOK ESSAY #5grade 12 Question: Statistics can be very helpful in providing a powerful interpretation of reality, but also can be used to distort our understanding. Discuss some of the ways in which statistics can be used or misused in different areas of knowledge, to assist or mislead us, and how we can determine whether to accept the statistical evidence that is presented to us. Krishna Shukla Grade 12 TOK essay Word count: From my vantage point, statistics refer to the manipulation of numbers to summarise, or simplify the perception of certain scenarios. However, the thin line between objectivity and subjectivity when incorporating the use of statistics marks the fulcrum between accuracy and inaccuracy, and furthermore relates to the reliability of their application. Objectivity refers to the perception that results from observable situations regardless of personal interpretations while subjectivity gives room for such interpretations to be made with human intervention. Raw statistics are uninfluenced by the human intervention due to the fact that they solely incorporate the use of universally acclaimed numbers. Obviously this is with respect to the fact that the ?human? nature that humans possess is cut out of the picture of the genesis of a statistic. That is to say that the two major assumptions for purity of raw statistics in colloquial terms is that statistics, in an instance are manifested ...read more.

The self-explanatory role of language and intention is prominent in such cases and also in its power to emphasise or elude one from the truth. Hence in mathematics, when evaluating the reliability of statistics, pay close attention to the language used and evaluate the interest of the source before choosing whether or not to accept it. In the case of human sciences, psychology is exploited in order to sell statistics for the maker?s gain. This is commonly seen in business advertisements such as the one depicted earlier, or in the form of media communication like news channels that are designed to hold a watcher?s attention, at times, by causing paranoia. Such information could sometimes be partially true but by saying that one out of every two people wearing a burkha, whom you walk by on the road is a terrorist, psychology is used to cause fear and therefore hold one?s attention to the toilet paper advert soon to come up. Gun sales, due to this post 9/11 sky rocketed as people were so paranoid that they would take any measure to protect themselves. In such a case, variables such as being in the middle of Afghanistan are not defined and a statistic like this by itself, although telling the partial truth, is camouflaged on the intertwined use of language and there is in turn a good chance that the essential information is lost and such manipulation could make people?s perceptions of the statistic wrong. ...read more.

I believe such statistics blur the truth to such an extent that they shouldn?t be paid heed to. Such scrutiny is also necessary in the judgment of statistical reliability. So now the question of morality comes along, is it morally correct to blur statistics and hence not lie, but manipulate the truth in such a manner that it is looked at differently? I believe this relates to the impact it has on society. One may think that statistics used in advertisement campaigns may not entirely be true, but they do no harm, however, such encourage consumerism culture that is also reflected by behavior such as the over consumption of fast foods leading both to poor health and increased scarcity of resources. Government intervention restricting manipulation of certain statistics should also be tolerated. In mathematics, one may think that statistics greatly help in model making and the simplification of overly complex scenarios, but even here, if the variables are not paid heed to, statistics may cause one to deviate from the truth. In history, although it helps observers get an estimate as to what must have happened, it is highly prone to human intervention. Therefore, I advocate for an alternative use if given a choice. But If statistics have to be used, one should evaluate them with the tools mentioned in the paper. ...read more.