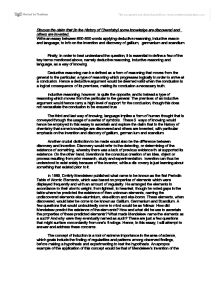 Discuss the claim that [in the History of Chemistry] some knowledge are discovered and others are invented.

Discuss the claim that [in the History of Chemistry] some knowledge are discovered and others are invented. Write an essay between 600-800 words applying deductive reasoning, inductive reason and language, to info on the invention and discovery of gallium, germanium and scandium Firstly, in order to best understand the question, it is essential to define a few of the key terms mentioned above, namely deductive reasoning, inductive reasoning and language, as a way of knowing. Deductive reasoning can be defined as a form of reasoning that moves from the general to the particular; a type of reasoning which progresses logically in order to arrive at a conclusion. Hence a deductive argument would be deemed valid when the conclusion is a logical consequence of its premises, making its conclusion a necessary truth. Inductive reasoning, however, is quite the opposite, and is instead a type of reasoning which moves from the particular to the general. The premises of an inductive argument would hence carry a high level of support for the conclusion, though this does not necessitate the conclusion to be ensured true. The third and last way of knowing, language implies a form of human thought that is conveyed through the usage of a series of symbols. ...read more.

The concept of induction is a tool of extreme importance in the area of science, which goals include the finding of regularities and patterns among observed findings, before making a hypothesis and experimenting to test the hypothesis. An apropos example of the application of this concept would be that of Mendeleev's invention of the periodic table in 1869; it was based on recurring trends that were observed by him. His arrangement of the elements in terms of their weight, from lightest to heaviest, saw him organizing them into a table. It was only when Mendeleev organized the table into horizontal rows did he observe a pattern between the elements. However, this pattern was only present when he left certain blanks in the table. This is a prime example of inductive reasoning, as his predictions of the elements were based on the hypothesis that was supported by the premises, though there was no solid proof to suggest that the conclusion was necessitated to be true. In his assumption that the blanks were left there, he noticed that elements with similar chemical properties appeared at regular intervals in the form of vertical columns on the table, leading him to suggest that the blank spaces were held by elements that were chemically similar to elements in the same column. ...read more.

Gallium, derived from the latin word Gallia meaning "Gaul", quintessentially meaning modern day Frances, was discovered by French scientist Lecoq de Boisbaudran in 1875. Though it was predicted by Mendeleev in 1869 as eka-aluminium, Boisbaudran named it Gallium after his homeland of France, thus showing how through language, the background of the discoverers of the elements could be conveyed. Similarly, the elements of Scandium and Germanium were discovered by a Scandinavian and German scientist respectively, leading to their names. Thus, in conclusion, one can see how inductive, deductive reasoning, as well as language as a ways of knowing can be seen to be rather accurate, though in reality, they are also hindered by limitations with regards to their employment, which make it inadequate to thoroughly prove something scientifically. While deduction is based on a logical progression based on true premises, it does not allow for observation or experimentation to test the validity. Likewise, though induction is driven by observation of trends, it does not use the logical progression which is featured in the deductive reasoning to make its proof. Hence, the development of scientific method would necessitate the synthesis and usage of BOTH logical approached to make for an all encompassing conclusion. ...read more.