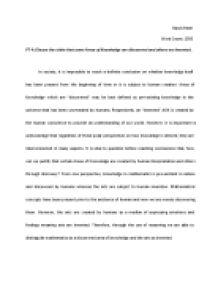 Discuss the claim that some Areas of Knowledge are discovered and others are invented.

﻿Harsh Patel Word Count: 1593 PT 4: Discuss the claim that some Areas of Knowledge are discovered and others are invented. In society, it is impossible to reach a definite conclusion on whether knowledge itself has been present from the beginning of time or it is subject to human creation. Areas of Knowledge which are ?discovered? may be best defined as pre-existing knowledge in the universe that has been unrevealed by humans. Respectively, an ?invented? AOK is created by the human conscience to provide an understanding of our world. However, it is important to acknowledge that regardless of these polar perspectives on how knowledge is derived, they are interconnected in many aspects. It is vital to question before reaching conclusions that, how can we justify that certain Areas of Knowledge are created by human interpretation and others through discovery? From one perspective, knowledge in mathematics is pre-existent in nature and discovered by humans whereas the arts are subject to human invention. Mathematical concepts have been present prior to the existence of human and now we are merely discovering them. However, the arts are created by humans as a median of expressing emotions and feelings meaning arts are invented. ...read more.

In doing so, I have always composed my own music to adjust with my mood and emotions. From this act, I understand that music as a form of art is merely dependant on human creation and can be identified as invented. I also have a natural talent for creating fine paintings and drawings as I am a visual learner and I can often commit images to memory. I realised that even though I have an imaginative side, I often imitate paintings that I have previously seen. It is impossible replicate an exact painting because my interpretation of an art will always be different from its original creator. Through reasoning, I am able to realize that not only is art created but it can never be replicated. Since art cannot the replicated, every time a person views a painting they would be creating their own individual interpretation. Thus, visual arts are not only created by the painter himself but the observers with their own perspectives. All in all, the various forms of art are all created by humans based on human interpretation of how they perceive their surroundings. I presented that music in the form of art is created by the individual therefore it must be invented; but some people would argue that no one invented music as it is simply sounds put together. ...read more.

If mathematics is actually discovered it leads to many more questions and implies many other ideas. If mathematics is discovered than it is true that many mathematical theories are undiscovered. It can also be stated that true knowledge that we gain from mathematics is indefinite. Therefore it can be argued that even though we call ourselves civilized, we may not know anything about the true world. Even though this may feel like an exaggeration, we cannot disregard the valid point because a definite answer is unapproachable. If knowledge is endless like math, which is not completely discovered than it can be argued that we merely skimmed the surface of truth. Overall, some AOK are believed to be discovered and others are known to be invented. In my case, mathematical knowledge is pre-existing since math has a relationship with nature and was present before the human race. On the other hand, the arts are invented by humans as a form of expressing emotions, feelings and interpretation of their surroundings. It is also understood that, it is possible for two oppositely derived AOK to be interconnected in many ways. Ultimately, whether AOK are invented or discovered we know that there are endless sockets of pre-existing knowledge that need to be unwrapped by humans in the search for a greater truth. ...read more.