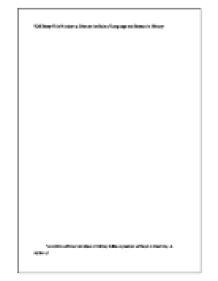 Discuss the Role of Language and Reason in History

TOK Essay Title Number 9: Discuss the Role of Language and Reason in History "A nation without an idea of history is like a person without a memory. A victim of amnesia who is lost the remembrance of things past is incapable of acting in the present or of planning for the future" (Fischer on heroesinamerica.org). This quote by David Hackett Fischer is very accurate because it proves that without history nothing has an identity because history defines how a person or place came into existence. It is not only a record of past events and times but it also a way of understanding the present and foreseeing what will happen in the future as it is generally said that history often repeats itself. In this essay, I will be exploring three knowledge issues which are: in what ways do reason and language contribute to the certainty of historical explanations, how far can we talk coherently about a historical method, and to what extent is history an objective discipline? Language is one of the main ways in which we acquire knowledge about the world. It is extremely important in history as the only thing all historical documents have in common is that they are written in a particular language. According to the Sapir-Whorf hypothesis, language determines our experience of reality, and we can see and think only what our language allows us to see and think. ...read more.

The British however did not feel that they were treating the Americans unfairly and merely wanted the colonies to bear the expense of their administration and defense as British were facing a lot of postwar debt (Ibis Communications). This example shows that both countries have their own reasons for their actions and both seem to believe that they are correct. Historical methods comprise of techniques by which historians use primary sources and other evidence to research and then advance further by writing the history of that particular event. Bias plays an important role in this because individual historians interpret the same evidence in their own different ways. Bias is based on many things such as culture, religion, political or social differences, and past experiences (Lagemaat, 309).This is the reason why it is commonly said that no two historians will have identical views on the same event. Proof that historians are influenced by cultural and political factors is shown clearly during the Seven Years War in 1592 when Japan invaded Korea in the hope of conquering over them. Korean historians perceived this event as a tragedy which was not beneficial to Korea at all whereas Japanese historians believed that Japan was able to significantly improve the economic and political status of Korea (Wikimedia Foundation). This is just one example of many which shows both sides of the argument and an outsider can never tell which side is right and which side is wrong. ...read more.

Although this is not entirely true for all historical events one can never be absolutely sure as eye witnesses are not always reliable and evidence can always prove to be false or altered. An example in which history was abused is found in the October Revolution in 1917 in Russia. Historians have found two similar pictures from this event: in the first picture Trotsky is standing in the center of the stage next to Lenin however, later after Trotsky fell from grace and fled into exile he was erased which is clearly shown in the second picture. This has been proven has the two pictures are identical except for this one major difference. This shows how evidence has been tampered with in the past and what a significant impact it has caused on the rest of the world and how they now perceive the October Revolution (Lagemaat, 306). After having discussed the above knowledge issues, it is clear that history is not always reliable yet it is a very important for one to study history since knowledge of the past is vital if we want to make progress in the future. Although interpretations of the same event are confusing they may also be beneficial as it allows people to think of all the possibilities that could have occurred. I would like to conclude with the following quote "we do not live in the past, but the past in us" (Phillips on Primal-Page). This means that even if one tries to ignores history it is not possible as history is inevitable and very important in order to succeed in life. ...read more.