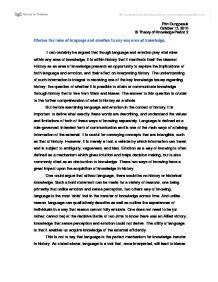 Discuss the roles of language and emotion in any one area of knowledge. It can certainly be argued that though language and emotion play vital roles within any area of knowledge, it is within history that it manifests itself the clearest. History as an area of knowledge presents an opportunity to explore the implications of both language and emotion, and their effect on interpreting history. The understanding of such information is integral to resolving one of the key knowledge issues regarding history: the question of whether it is possible to attain or communicate knowledge through history that is free from filters and biases. The answer to this question is crucial to the further comprehension of what is history as a whole. But before examining language and emotion in the context of history, it is important to define what exactly these words are describing, and understand the values and limitations of both of these ways of knowing separately. Language is defined as a rule-governed, intended form of communication and is one of the main ways of attaining information of the external. It is useful for conveying concepts that are intangible, such as that of history. ...read more.

To refer to a date in relation to the death of one man allows us to further question why this particular man was chosen. Again this ties into the bias with language, as anyone referencing BCE is undoubtedly predisposed towards Western thinking. Even I retain these biases as well, always confused momentarily whenever I am exposed to the time frame established in Thai culture, such as ?? 2553 (which is coincidentally also referenced to the death of another man). It appears that although language can and does lead to historical knowledge in methods that other ways of knowing cannot, language can never lead to truly objective information precisely for the same reason that it is useful: it is all relative to the paradigm which one is under. The impact of labeling and generalizations also touches upon the realm of emotion and its effects upon history. The age-old adage proclaims that "history is written by the victors"1 and the victors will more often than not think positively about themselves but not of their opponents. For example, during my Thai history class, my teacher will go at great lengths to explain the courageous nature of the Thai ...read more.

In essence, it appears that emotion and language both play a key role in history, one for it and one about it. However, it seems that these two ways of knowing interact with history in such a way as to make the objective deduction of historical knowledge difficult. Though one can argue that the imposition of conceptual frameworks and the emotionally fuelled decisions are not mutually exclusive with an objective history, it remains that within any human society there will exist a paradigm, a filter, a bias. And in these items will lay prejudice. A quote by Friedrich Nietzche summarizes this: "To the extent that man has for long ages believed in the concepts and names of things as in aeternae veritates he has appropriated to himself that pride by which he raised himself above the animal: he really thought that in language he possessed knowledge of the world." We may pride ourselves on being more civilized than animals and for having language, but it is foolish to assume that with only these tools that we have gained any knowledge of the world apart from our own. ?? ?? ?? ?? Prin Oungpasuk October 13, 2010 IB Theory of Knowledge Period 2 ...read more.