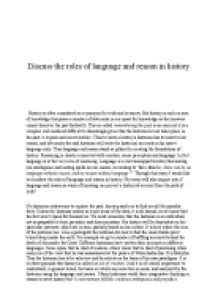 ﻿Discuss the roles of language and reason in history History is often considered as a synonym for truth and certainty. But history is such an area of knowledge that poses a number of deterrents in our quest for knowledge as the knowers cannot discover the past forthwith. This so called remembering the past is no easy nut-it is a complex web rendered difficult to disentangle given that the historical event takes place in the past; it is gone and irrecoverable!. Thus to write a history a historian has to resort to his reason, and obviously the said historian will write the historical accounts in his native language only. Thus language and reason stand as pillars for creating the foundations of history. Reasoning is closely connected with emotion, sense perception and language. In fact language is at the very core of reasoning. Language is a vast unmapped territory fascinating our intelligence and casting spells on our reason. According to ?Max Mueller, there can be no language without reason, and no reason without language?2. Through this essay I would like to elucidate the roles of language and reason in history. My essay will also inquire into if language and reason as ways of knowing can pervert a historical account from the path of truth? If a historian endeavours to explore the past, his step surely is to find out all the possible facts. ...read more.

So can language be considered as a cornerstone for the historians? As a child, I was mesmerized by wars. I read the most bewitching account of war in Homer?s Iliad where he talks about the legendary Trojan War. Was it a war or only a myth? Nothing can be said as Homer derived the epic poem from primeval sources. In the epic, Helen is limned as the most beautiful woman on earth while Achilles as the grandest warrior. Now what can we say as to the authenticity of Homer?s claims? Were the characters for real or it was his national bias to portray them as Hellenic legends? I read the Greek epic through translation only. Did the translator write the exact replication of Homer?s words, or he amalgamated the facts with his presumptions, giving them a hyperbolized touch? Is the epic not twice removed from reality then? Language is not as simple or straightforward as it is considered. Sometimes it becomes very difficult to pin down the meaning of the words with complete precision. Language is neither innocent nor magical, and can be used to manipulate the way we see things. Language can also be used to influence and persuade people. It can sometimes be illusory if the historian uses weasel words or words laden with emotions. Language is power. If it can be used to educate or enlighten people; it can also be used to fuel the flames of hatred. ...read more.

If once we start believing that the French are arrogant and the English cold, we will notice a number of examples that can confirm our prejudice. There is in fact no way we can justify our beliefs even on the basis of experience. In my opinion a historical account based on reason cannot be considered true as reasoning is a complex process and reasoning modes are not universal. Most of the tenets of rationalism have evolved from Greek culture or Confucianism-without any convergence of a single set of common rules. Thus reason is nothing but our faith and faith differs from person to person. My reason says that it was Hector and not Achilles who was the greatest warrior as the former fought for his country while the latter for his pride. But will all agree with me? To conclude I would like to say that although language and reason are very conducive to a historian in his quest for knowledge, they cannot be fully relied on. The historian being a man of flesh and blood may be prone to the venom of pride, prejudice, laziness and ignorance. Truth is stranger than fiction, and the historian may befuddle us through his biased language and imaginative thinking. Before coming under the sway of enticing history we must use our senses and put the historical account to the test of evidence and truth, always keeping in mind that history is nothing but a fable agreed upon. (Napoleon Bonaparte) ( of 5) ...read more.