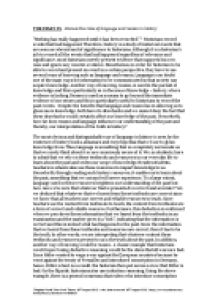 ﻿TOK ESSAY #5 - Discuss the roles of language and reason in history ?Nothing has really happened until it has been recorded.?1 Historians record events that had happened. Therefore, history is a study of historical events that are seen as relevant and of significance to historians. Although it is a historian?s job to record all the events that had happened regardless of relevance and significance, most historians merely present evidence that supports his own case and ignore any counter-evidence. Nonetheless, in order for historian to be able to record and present an event in a certain perspective, they have to use several ways of knowing such as language and reason. Language is no doubt one of the main ways for information to be communicated so that society can acquire knowledge. Another way of knowing, reason, is used in the pursuit of knowledge and this is particularly so in the area of knowledge ? history, where evidence is lacking. Reason is used as a means to go beyond the immediate evidence of our senses and this is particularly useful to historians to record the past events. Despite the benefits that language and reason has in allowing us to glean more knowledge, both have its drawbacks and we cannot deny the fact that these drawbacks would certainly affect our knowledge of the past. ...read more.

Thus, we conclude and interpret truth to be all these information that is presented by historians. Although we do not know who is Hiter, yet based on certain ways of knowing such as language and reason, we know that he is bad and he wants to wage a war. However, there are some drawbacks on using language as a way of knowing to understand the past. Language, by nature, is highly ambiguous and most historians have their own style of writing and tend to write in a single perspective that they are in favor of or are subjected to. There is no doubt that a British historian would report on events in favor of Britain while a Russian historian would report in favor of Russia. In the Anglo-Russian war, newspaper reports from the two countries differed as to which country was responsible for the outbreak of this war that lasted from 1807-1812. Hence, this shows that the views that historians often present to us in textbooks are often subjective to personal opinion. Being presented with two differing perspectives on the war, it becomes hard to distinguish and interpret which report is the truth as well as which country was the trigger for the war. ...read more.

On the other hand, the doubts that arise from reason are quite abstract in nature but in the real world, to doubt and abandon logic, the whole structure of knowledge would collapse. Hence, these forms of reasoning are a norm and what society conforms to and hence, truth becomes what the majority perceives it to be. All in all, language and reason would indefinitely aid us in our understanding of the past and perhaps, an interpretation of the truth about the past. From this discussion, we can see that language and reason play a significant role in analyzing the past and presenting an interpretation of the truth. Much of the evidence produced are so greatly crafted and portrayed with such logical reasoning and accurate language that one feels that it must be true even though it is hard to believe due to high subjectivity. Yet, on the other hand, examples of fallacies in reasoning and propaganda in language are said to be misleading us from the truth. Nonetheless, it is up to our perception and beliefs to interpret what really happened in the past as every individual has their own mental maps and perceive things differently. (1588 words) 1Virginia Woolf , New York Times, 18th August 2012 , web , date accessed: 18th August 2012 , http://www.nytimes.com/books/first/n/nicolson-woolf.html ...read more.