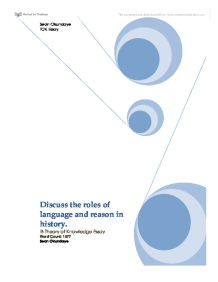 Discuss the roles of language and reason in history.

Discuss the roles of language and reason in history. IB Theory of Knowledge Essay Word Count: 1577 Sean Okundaye Question 9: Discuss the roles of language and reason in history. The study of history is one in which people or communities attempt to understand the nature of humans through the study of events in the past. When we look at historiography or the writings of history, we are looking at the study of historical events that have been seen as relevant and meaningful by historians. So when we study this area of knowledge, we need to think about what affects the way we interpret it, and therefore by association, how it is taught to us. There are various components to the learning and teaching of history and perhaps the two most prominent components are language and reason; two ways of knowing. Language is fundamentally a systematic means of communicating by the use of sounds or conventional symbols. This is in itself linked to reason, which is a rational motive for a belief or action. Indeed language is a powerful tool that can communicate beliefs and facts but also manipulate such facts. ...read more.

Given the heatedness of this debate between the two schools of thought, what we see is evidence of how language influences the way that the German reader would understand the Holocaust and WW2. The way in which German historians on the rightist side of the Historikerstreit present the Holocaust is one in which, whilst never fully justified, was often presented as being understandable. However, the leftist side completely abhorred the events and so this would present a German person with a dilemma. Whom do they choose to believe? The fact that these historians would share a common language with the German people means that there would be little room for linguistic misinterpretation. However, since there may be some bias with the rightist view, perhaps the most logical step would be to use the leftist view of the Holocaust as a stepping stone towards understanding WW2. This is where reason comes in. The German term, "vergangenheitsbew�ltigung" describes the process of dealing with the past, best translated into English to mean "struggle to come to terms with the past"4. This is especially targeted at schools in Germany where they are made to learn repeatedly about different aspects of Nazi Germany from the 5th grade when the students are aged from 10-11 onwards and visit various concentration camps and Holocaust survivors5. ...read more.

The reason behind this is the fact that the British are generally unanimous in their view that they were on the side of the "good" and the Japanese and Germans were "evil". One could then perhaps argue that the reason for this stems from our own interpretation of the relationship between ethics and war, as opposed to the fact that we are British. Language-wise, however, we do not have any unique words associated with these events and so that perhaps is the reason why we are unable to fully comprehend the views of the Japanese, and to a lesser extent, the Germans. However, the British view of WW2 is perhaps one that would be echoed in other societies, be it American or French. Given my investigation, I believe that language and reason both have significant impact on history as it is these ways of knowing that we use to analyse such events. Without language, we simply would not be able to have history as this area of knowledge is something that I believe is the result of language, as well as important events, over many generations. I also believe that reason is part of history because I believe that every individual is able to give their own personal interpretation of events, although this will always be open to possible bias, be it culturally or ideologically. ...read more.