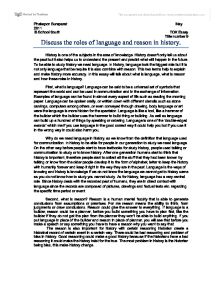 Discuss the roles of language and reason in history. History is one of the subjects in the area of knowledge. History doesn't only tell us about the past but it also helps us to understand the present and predict what will happen in the future. To be able to study history we need language. In history, language took the biggest role but it is not only language that be require it is also combine with reason. This two terms help to explain and make history more accuracy. In this essay will talk about what is language, what is reason and how these roles in history. First, what is language? Language can be said to be a universal set of symbols that represent the world and can be used in communication and in the exchange of information. Examples of language can be found in almost every aspect of life such as reading the morning paper. ...read more.

After one generation humans start to think that history is important, therefore people start to collect all the stuff that they had been known by talking or know from the older people develop it to the form of alphabet, letter to keep the history with humanity forever and keep it right in the way they are in the past. Language is the ways of knowing and history is knowledge if we do not know the language we cannot get to history same as you do not know how to study you cannot study. As for history, language has a very central role. Since history deals with the recorded past of humans, they are in direct contact with language since the records are composed of pictures, drawings and factual texts etc. regarding the specific time period or event. Second, what is reason? Reason is a human mental faculty that is able to generate conclusions from assumptions or premises. ...read more.

As in history, reasons start to exist for a long period as you go back to ancient time you can see that reason start to develop in the caveman time as the reason mean ability think, the first time caveman saw the fire so they thinking to find the reason where it come from the first reason that they come up with is they have thought that a part of the sun had broken off and fallen to earth. After that they start to develop their reasoning caveman did not know how to create fire himself using friction or flint until about 7000B.C. after the first fire they notice a lot of stuff for example fire was used to keep warm, cook, illuminate and later to clear forests of trees to create open areas to better hunt animals. FIRE was also used in fighting and wars. These show how much reason important in the development of people. ?? ?? ?? ?? Phakapon Buraparat May 2011 IB School South TOK Essay Title number 9 ...read more.