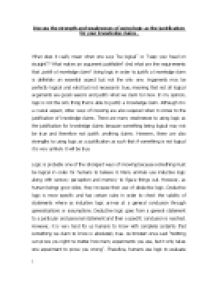 Some religions may seem very logical for people that believe in them while they may sound absolutely illogical for those who do not. A person that strongly believes in their religion might say that it is enough for them to use faith as a justification of their knowledge claims but in fact this still results in their faith being logical to them. So, even though it might not be logical to other people and they do not share the same faith, logic is still used as the principal justification of the knowledge claim. This is why people have different requirements and different standards for considering what are and what are not good reasons for a knowledge claim. In conclusion, it is essential to use logic to justify knowledge claims but it becomes even more reliable when more ways of knowing are used as well. If something was to be completely logical but logic was their only reason for claiming to know such thing, the argument would become weaker. Where as, if something is logical and is backed by sensory perception or faith, it is more likely to be a stronger argument. While logic is a very strong justification for claiming to know something it may not be strong enough. The question is, are there ever enough justifiable reasons to absolutely know something? ...read more.